Manohar Khattar hits out at Amarinder, tells him to stop 'inciting innocent farmers' 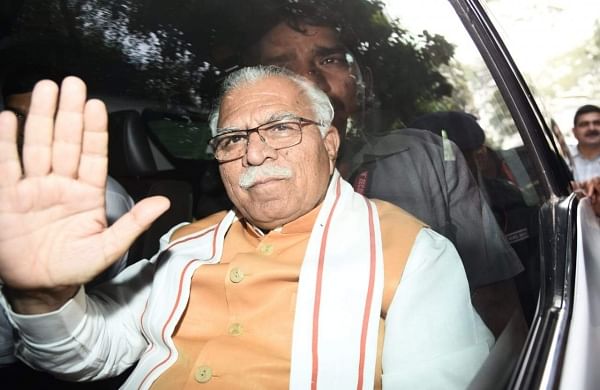 Khattar asked Singh to desist from misleading farmers, pointing out to him that he has already pledged to quit politics if the Minimum Support Price mechanism is ever dismantled.

Khattar also accused the Punjab CM of "only tweeting and running away from talks" with him for the last three days on the issue.

"I've been trying to reach out to you for the last 3 days but, sadly, you have decided to stay unreachable -- is this how serious you are for farmers' issues? You're only tweeting and running away from talks, why?," Khattar said in another tweet.

Launching a scathing attack on Singh, the senior Bharatiya Janata Party leader told him, "Time for your Lies, Deception and Propaganda is over -- let the people see your real face. Please stop putting the lives of people in danger during the Corona pandemic. I urge you not to play with the lives of the people at least avoid cheap politics during the time of the pandemic," Khattar told Singh.

Earlier in the day, Amarinder Singh had lashed out at the BJP-led government in Haryana for stopping farmers from moving towards Delhi, saying the use of "brute force" against them is "totally undemocratic and unconstitutional" Haryana had earlier announced to completely seal its borders with Punjab to prevent farmers from entering the state for their 'Delhi Chalo' protest march against the Centre's farm laws on November 26-27.

"Why is @mlkhattar govt in Haryana stopping the farmers from moving to Delhi? The tyrannical use of brute force against peacefully protesting farmers is totally undemocratic & unconstitutional," said Singh in a tweet.

He said farmers have been peacefully protesting in Punjab against the farm laws for two months.

"Why is Haryana govt provoking them by resorting to force? Don't the farmers have the right to pass peacefully through a public highway?", Singh had asked.

The Haryana Police on Thursday used water cannons and tear gas to disperse a group of farmers from Punjab who allegedly tried to jump police barricades to enter Haryana as part of their 'Delhi Chalo' march.

The Punjab chief minister said it was a "sad irony" that the constitutional rights of farmers were being "oppressed" on the Constitution Day.

Farmers are marching towards Delhi to protest the Centre's new farm laws.

Protesting farmers have expressed apprehension that the Centre's farm laws would pave the way for the dismantling of the minimum support price system, leaving them at the "mercy" of big corporates.

The government has maintained that farm laws will bring farmers better opportunities and usher in new technologies in agriculture.