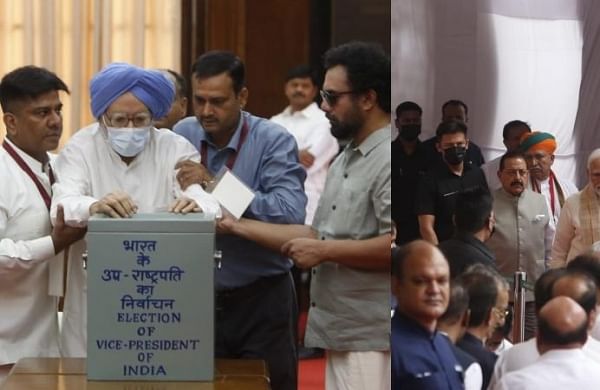 NEW DELHI: Polling to elect the next Vice President of India began at 10 am, with Prime Minister Narendra Modi being among the first ones to cast vote.

Former Prime Minister Manmohan Singh arrived in a wheelchair and needed support to stand up and cast his vote.

CPM MP John Brittas was among those who helped the veteran leader in exercising his franchise.

The two-term prime minister greeted those present with folded hands.

Home Minister Amit Shah and Education Minister Dharmendra Pradhan were among the leaders who turned up early at the Parliament House.

The polling will continue till 5 pm, following which the counting of ballots will take place.

With the ruling BJP having an absolute majority in the Lok Sabha and 91 members in the Rajya Sabha, Dhankhar has a clear edge over his rival.

He is likely to succeed incumbent M Venkaiah Naidu, whose tenure ends on August 10.

All MPs of the Lok Sabha and the Rajya Sabha, including nominated members, are entitled to vote in the vice presidential election.

The two Houses of Parliament together have a sanctioned strength of 788 MPs, of which there are eight vacancies in the Upper House.

Hence, 780 MPs are eligible to cast their ballot in this election.