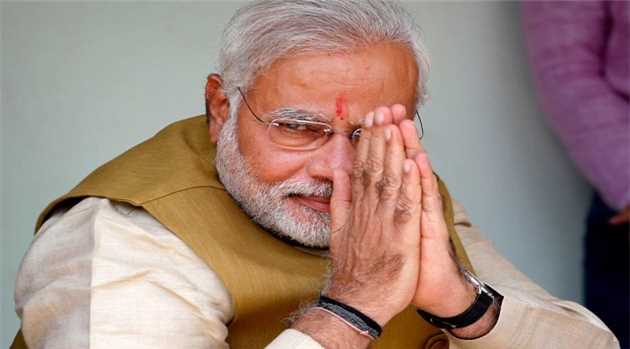 Prime Minister Narendra Modi launched a mega recruitment drive, Rozgar Mela, for ten lakh personnel today. On this occasion, appointment letters for various posts of Central Government were handed over to 75 thousand of newly inducted appointees in the first tranche.

While addressing the new appointees through video conferencing, the Prime Minister said, this is another step to provide employment opportunities to youth. He said, several steps have been taken by the government to provide employment and self employment opportunities in the last eight years. He said, India is marching towards becoming self-reliant in every sector and the target of becoming a developed nation can be achieved with the contribution of everyone.

He said, India is the fifth biggest economy now and this feat has been achieved due to the reforms undertaken in the last eight years. He said, the government has set a target to spend 100 lakh crore rupees on infrastructure development in the country. He said, works for creating robust infrastructure in the country are creating several employment opportunities for the people.

The Prime Minister said, youth is the strength of the country and the central government is working on several fronts to provide them with employment opportunities. He said, focus on skill development of youth, supporting self-employment initiatives, giving a boost to the rural economy, creating an enabling environment for Startup ecosystem and infrastructure development have created immense employment opportunities at various levels.

He said, one crore 50 lakh youth have been provided skill development training and one crore job opportunities have been generated in Khadi and Gramodyog sectors. He said, 80 thousand startups have emerged in the country within a span of a few years, and lakhs of people are working in these startups. He said, employment was provided to seven crore people through MGNREGA. He expressed confidence that a boost to create robust digital infrastructure and expansion of the 5G network in the country will generate more employment for the people.

Mr. Modi said, India is scaling new heights with Make in India and Aatmnirbhar Bharat Abhiyan. He said, these initiatives have led to a significant rise in the number of exports and the country is marching to become a global hub in various sectors. He said record exports reflect that several new employment opportunities have been generated in every field. He said, Employees' Provident Fund Organisation (EPFO) added around 17 lakh net members in August this year.

The Prime Minister congratulated the new appointees saying that the efficiency of government departments has increased due to the efforts of the country's Karmayogis. He also greeted everyone on the occasion of Dhanteras.

Minister of State for Personnel, Public Grievances, Pensions Dr. Jitendra Singh said, this day is historic as 75 thousand appointment letters were issued to the youths. He said, under the leadership of the Prime Minister, several decisions have been taken for the welfare of the youth and providing them with employment opportunities in various sectors.

All Ministries and Departments are working towards filling up existing vacancies against sanctioned posts in a mission mode. The new recruits will join 38 Ministries and Departments of Central Government. The appointees will join at Group A, B and C levels. The posts on which appointments are being made include Central Armed Force Personnel, Sub Inspector, Constable, LDC, Steno, Income Tax Inspectors, and MTS. (AIR NEWS)