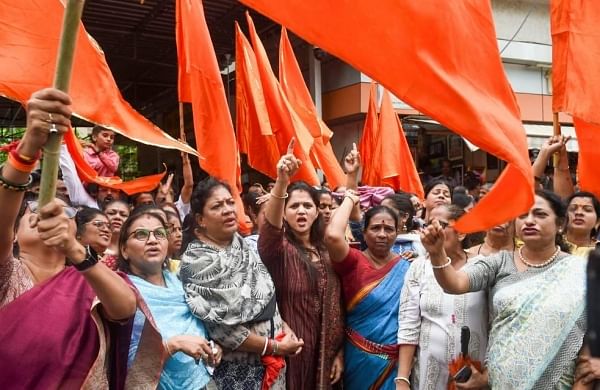 MUMBAI: As the rebellion by senior Shiv Sena leader Eknath Shinde plunged the Maha Vikas Aghadi government in Maharashtra in a political crisis, an editorial in the party mouthpiece `Saamana' on Thursday said the renegade legislators should "mend their ways in time".

The MLAs who have succumbed to the BJP's "pressure tactics and inducements" should know that they would become "permanently former" if common Sena workers made up their mind, it added.

Shinde and 36 other Sena MLAs besides ten independents are camping in Guwahati at present.

Shiv Sena has withstood several challenges, and being in power or out of it does not make any difference to the party, the Sena mouthpiece said.

It admitted that the fate of the Shiv Sena-NCP-Congress government is currently hanging in balance.

Legislators who were elected on the Shiv Sena ticket are now "caught in the BJP's clutches," the Saamana editorial further said.

"In Surat, members of the Maharashtra BJP were present with the rebels, while in Guwahati, Assam ministers were there to welcome them.

"Till recently, the BJP was attacking Shiv Sena legislators with the charges of corruption and money laundering and threats of ED, CBI and IT probe," the editorial said, apparently referring to MLA Pratap Sarnaik.

Sarnaik, now with the rebel group in Guwahati, has faced an ED probe for alleged money laundering.