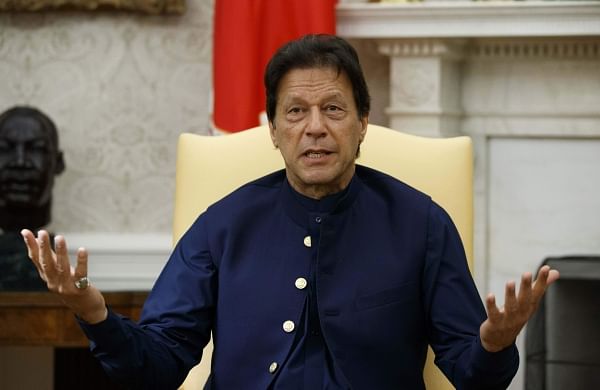 DAVOS: Pakistan Prime Minister Imran Khan has claimed that he met with a "brick wall" when he approached his counterpart Narendra Modi with a peace proposal soon after assuming office.

In an interview to Foreign Policy magazine on the sidelines of WEF 2020 here, Khan also said he had told Modi that Pakistan will act firmly if it was given evidence of any Pakistani involvement in the Pulwama terror attack, but India instead "bombed" Pakistan.

Tensions have escalated between the two neighbors following India withdrawing the special status of Jammu and Kashmir in August 2019. Since then, Khan has been trying to seek global intervention to de-escalate the tensions.

On Thursday, India's External Affairs Ministry spokesperson Raveesh Kumar categorically ruled out any third party role on the Kashmir issue, asserting that any issue between the two countries should be resolved bilaterally.

In the interview, Khan said that he is a firm believer that military means are not a solution to ending conflicts.

"After taking office I immediately reached out to Prime Minister Narendra Modi. I was amazed by the reaction I got, which was quite weird."

"The subcontinent hosts the greatest number of poor people in the world, and the best way to fight poverty is to have a trading relationship between the two countries rather than spending money on arms. This is what I said to the Indian prime minister. But I was met by a brick wall," Khan said.

Khan took over the prime ministership in August 2018.

Referring to the suicide attack in Pulwama, Khan said he had immediately told Modi that "if you can give us any actionable intelligence (that Pakistanis were involved), we will act on it. But rather than do so, they bombed us."

While noting that both countries are not close to conflict right now, Khan said that it is important that the UN and the US act.

When asked about US President Donald Trump has a very close relationship with Modi, the Pakistan Prime Minister the relationship is understandable because India is a huge market, and of course every country would like the benefits of that market.

"My concern is not about the US-India relationship. My concern is the direction in which India is going," Khan said. Khan also sought to compare the events in India to what happened in Nazi Germany.

"Between 1930 and 1934, Germany went from a liberal democracy to a fascist, totalitarian, racist state. If you look at what is happening in India under the BJP in the last five years, look where it's heading, you'll see the danger. And you're talking about a huge country of 1.3 billion people that is nuclear-armed," he said.

About US-Iran tensions, Khan, in another interview to television channel CNBC, said he told Trump that war is not the solution.

"A conflict right now with Iran would be a disaster for developing countries," Khan said.

(THE NEW INDIAN EXPRESS)
163 Days ago