Miffed by SP MLAs' behaviour in UP Assembly, party ally Rajbhar says it's against House decorum 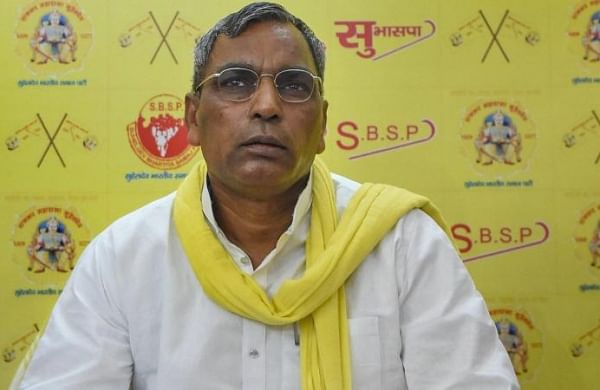 LUCKNOW: Taking a line contrary to the strategy of the Samajwadi Party, Suheldev Bharatiya Samaj Party (SBSP) chief OP Rajbhar, one of the main allies of Akhilesh Yadav, on Monday opposed the behaviour of SP MLAs who resorted to unabated sloganeering and protests inside the House during the joint address of the state Governor on the inaugural day of the first session of the 18th assembly, reconstituted recently.

The SP MLAs protested in the well of the House during the entire joint address of the Governor Ananadiben Patel. Condemning the behavior of the SP legislators, the SBSP chief said his MLAs did not take part in the protests as he found it against the decorum during the Governor’s address. “This is unbecoming of them (SP MLAs). This culture is not good. My MLAs did not take part in the unruly protests as we do not believe in such practices,” he said.

The SBSP chief said that the tradition of staging a protest during the Governor’s address should be stopped. “We have stopped it from our side. I have been watching this for the last five years and this is the sixth year and the same behaviour is going
on. I don’t like this. We want to bring about a change in this trend and we have taken the initiative in our own way,” said Rajbhar.

In fact, Rajbhar’s opposition to the SP MLAs’ behaviour in the house is the second instance in 24 hours where he has flayed his ally. On Sunday evening, the SBSP chief had accused the SP chief Akhilesh Yadav of doing politics by sitting in the comforts of AC.  He had even suggested to the SP chief to shed his comfortable air-conditioned confines and come out to meet people and mingle with them. He added that the SP leaders used to ask him to enlighten Akhilesh Yadav and prompt him to come out in the field. “His (Akhilesh Yadav) leaders want him come out, meet leaders, people and take interest in the organizational work. As they hesitate in telling the SP chief all this, they want me to covey this to him which I did,” said Rajbhar.

He also charged the SP chief with not giving 100 percent in the recently concluded Assembly elections. “He did not do his best and has still not awakened. I convened four meetings of my party on Sunday. If I can do this, why can’t Akhilesh Yadav,” asserted Rajbhar adding that as he was in alliance with the SP, it was the duty of everyone to toil equally. “We would have been in power today if we had tried well in the 2022 assembly polls as defeat is the reflection of laxity and lack of effort. Have some strength, some substance,” the SBSP chief advised Akhilesh Yadav.

Akhilesh Yadav has been fighting battles on different fronts. On the one hand, Azam Khan, Abdullah Azam and a number of Muslim leaders along with uncle Shivpal Yadav seem to be disenchanted with his leadership, while on the other, the SBSP chief’s piece of advice has given ammo to his bashers both in and out of the SP to criticise him.