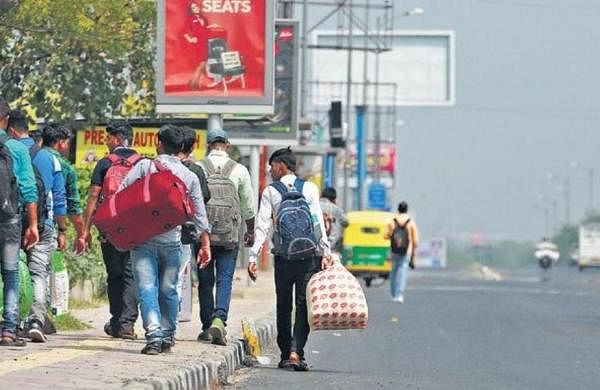 NEW DELHI: On Monday night, 23-year-old Mahesh Damor, along with five other migrant workers, realised they have no source of income to rely on in Gujarat’s Surat.

So they decided to walk - over 300 km from Surat to his village in Jhalod taluka in Dahod — with two brief breaks in Vadodara and Godhra. The initial coronavirus measures and the subsequent 21-day lockdown have rendered thousands of migrant workers jobless.

According to the Economic Survey of 2018-19, over 90 per cent of the total workforce is 'informal'. The worrying part is that the NITI Aayog estimates showed that India’s informal sector employees approximately 85 per cent of all workers.

"We were out of work and there were no busses or trains. So we decided to walk to our village," said Damor, who belongs to the Bhil community. A construction worker, he returned to his family with Rs 1,000 on Wednesday after walking for over 40 hours.

He is worried about the future. The bigger worry now is fighting the stigma in his village. "Other households in the village are saying I have returned with the virus and not letting me enter," he said.

As the 21-day lockdown kicked in, reports poured in from different parts of the county of migrant labourers being stranded. With railways and buses suspended, several walked for kilometres to reach their villages. Many were unable to make it across state borders.

"The narratives that are emerging from across the country indicate large-scale human distress. Most wage workers are employed by private contractors, which means they have lost their sources of livelihood," said Sudhir Katiyar, secretary, Centre for Labour Research and Action.

The Economic Survey 2016-2017 indicated an annual average flow of close to 9 million migrants between states for the period 2011-2016. The patterns of flows of migrants showed less affluent states saw more ‘out migration’ while the affluent states were the largest recipients of migrants.

Umi Daniel, director, migration and education at Aide et Action International said the main question now is who will come to the rescue of migrant workers.

"States need to step up coordination and have a dialogue on how they can provide a safe passage to them. There needs to be an immediate helpline for the workers. State governments which have a significant migrant population need to reach out to this population through special packages," said Daniel.

While some states have announced such packages, the biggest hindrance in accessing them is the lack of documents, pointed out Divya Varma, programme manager — policy and partnerships, Aajeevika Bureau.

"We know the major migration corridors in the country and figure out a mechanism to transport this population. If they cannot, they should find ways to fiscally contribute to the workers who are stranded," she added. The psycho-social impact on the daily-wage workers on losing their livelihood cannot be ignored, said Ranu Bhogal, director of policy, research and campaigns at OXFAM.

"They are also likely to suffer from trauma given the distance they are walking to reach their villages. Also, a lot of villagers are resisting the return of the migrant workers. This may boil over. The administration needs to put screening so that people are cleared by the government on not being positive for COVID-19," said Bhogal.

Organisations working at the grassroots level pointed out a bigger window to the lockdown would have given people in the informal sector a sense of preparedness. The smaller window also posed health challenges with workers trying to reach their destinations in cramped conditions, said Prameela V, project director of Bangalore-based NGO Sampark.

(THE NEW INDIAN EXPRESS)
140 Days ago