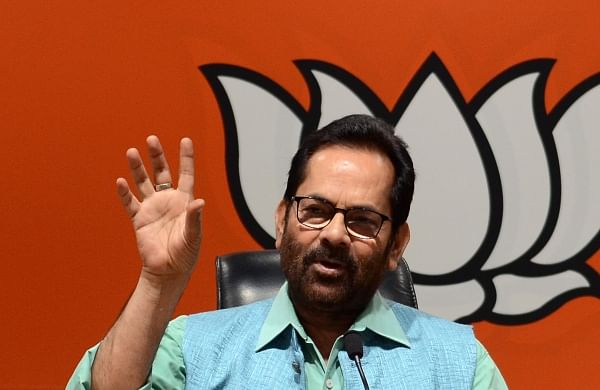 NEW DELHI: The minority affairs ministry will run a campaign from June 21 for creating awareness about vaccination against Covid in rural areas and to dispel apprehensions being spread by "some vested interests" over the inoculation drive in the country, Union Minister Mukhtar Abbas Naqvi said on Saturday.

As part of the "Jaan Hai To Jahaan Hai" programme, the minority affairs minister said the ministry along with various socio-educational organisations, NGOs and women self-help groups, will launch the awareness campaign on June 21.

The nationwide awareness campaign will be launched from minority dominated Rampur district of Uttar Pradesh, he said in a statement.

The campaign will be launched to create awareness on coronavirus vaccination in rural and remote areas of the country and also to "crush and curb the rumours and apprehensions, being spread by some vested interests" regarding the on-going inoculation drive, Naqvi said.

He said various religious leaders, prominent people from social, educational, cultural, medical, science and other fields will send out effective messages to the people to get vaccinated.

Street plays will also be organised across the country as part of the campaign, he said.

Naqvi said here that some vested interests are trying to spread rumours and apprehensions regarding vaccination and asserted that such elements are "enemies of the health and well-being" of the people.

"Two made-in-India coronavirus vaccines are the result of the hardwork of our scientists and it has been proved scientifically that these vaccines are absolutely safe and are an effective weapon in the fight against coronavirus," the minister said.

Naqvi said the Modi government is running the world's largest Covid vaccination drive under which crores of people have been vaccinated so far in the country.

The minister said India is far ahead of nations with better resources and facilities in terms of vaccination against coronavirus.

The government and the society have worked unitedly to defeat coronavirus and the country is coming out of the crisis, he said.