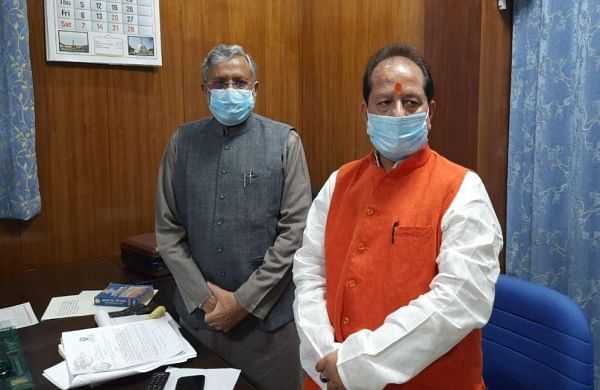 PATNA: In the wake of winning of 74 seats in the Bihar Assembly elections, which has elevated the status of the party to that of a big brother in the NDA, BJP made an unexpected change in its old leadership by dropping Sushil Kumar Modi from the post of Deputy Chief Minister.

Following the caste equations in votebank politics, BJP took everyone by surprise having announced the names of Tar Kishor Prasad, the Katihar MLA, and Renu Devi, the Bettiah MLA, as new Deputy Chief Ministers of the state.

According to party sources, the BJP is working on a foolproof plan to emerge as the single largest party in 2025 and to gain more than comfortable majority in the future.

"Every decision is discussed keeping the party's future  political challenges after 2020 assembly elections. It is a well known fact that politics in a state like Bihar thrives more on caste equation than the political ideologies. Thus, we are gearing up for development oriented politics through caste equation well maintained and balanced in representation", a senior party-head said, wishing not to be named.

Sources further added that the BJP has started grooming up its CM-face from the party for 2025 state elections.

Sources hinted that those who are prominent in the race of being projected as BJP's CM face from BIhar are Nityanand Rai, Dr Sanjay Jaiswal, Kameshwar Chaupal, Prem Kumar, Mangal Pandey and Giriraj Singh.

Rai, who is party MP from Ujiyarpur Lok Sabha seat, has emerged as one of the influential leaders of Yadav caste this time.

Nityanand Rai, junior home minister in the central government, is said to be mentored by Amit Shah for future role because of his longest association with the BJP and his growing influence among the Yadav voters.

Rai is promoted as a force to counter or diminish the political influence of RJD chief Lalu Prasad in the state's Yadav votebank.

Similarly, other prominent leaders are being groomed for future assignments to achieve the party's goal of coming into power in 2025 or 2030.

However, the BJP being cautious over taking decision can be gauged from the fact that the party dropped senior party leader Nand Kishor Yadav's name from the post of assembly speaker last minute on Tuesday.

The BJP announced Vijay Kumar Sinha, a Bhumihar caste and engineer by education, for the post of speaker in place of Nand Kishor Yadav.

"Nobody anticipated that Vijay Kumar Sinha could be the party's candidate for the assembly speaker. It has surprised us giving a clear message as to how the party is taking decisions to create larger base in Bihar," said party leader.

A million dollar question being asked in the NDA corridors is whether and how the BJP accomodates these senior leaders dropped in the first round.

Nand Kishor Yadav, Prem Kumar and many other senior leaders of BJP are waiting to be given important assignments in the Bihar government.

"It has become imperative to BJP to emerge as backward castes dominating with upper caste equation maintained party to counter both the RJD and the JD-U in future which have bases among the backward caste voters," said a party leader who wnated to remain anonymous.