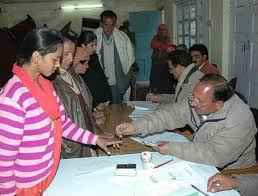 Sixty-six per cent voter turnout has been recorded in the third phase of Lok Sabha election on Tuesday.

64 per cent polling was recorded for both Lok Sabha and Assembly elections in Odisha as election were held simultaneously there.

Election Commission has seized unaccounted cash, illicit liquor, drugs, gold and freebies worth over 3126 crore rupees since the Model Code of Conduct came into effect.