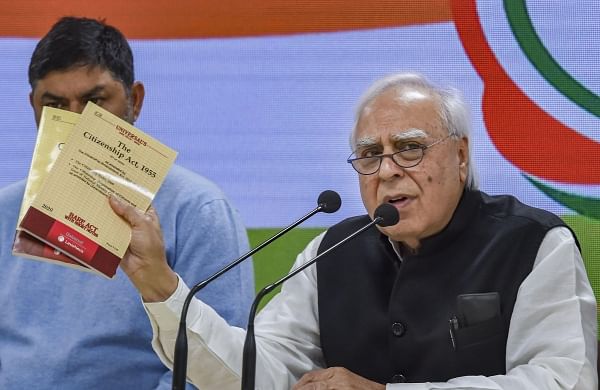 NEW DELHI: The Congress on Tuesday accused the Narendra Modi government of spreading falsehood regarding the Citizenship (Amendment) Act, which it said was "unconstitutional" as the country's Constitution does not allow the grant of citizenship on the basis of religion.

Senior Congress leader Kapil Sibal challenged Amit Shah for a debate on the new law, hours after the home minister challenged Rahul Gandhi and other opposition leaders for the same.

His comments came a day before the Supreme Court is set to hear petitions challenging the amended citizenship law.

Addressing a press conference, Sibal said Prime Minister Modi and Shah were spreading a "set of nine lies" on the amended citizenship law and wondered how the people of the country would believe them.

"The government, the prime minister and home minister are perpetrating nine lies on CAA. Their first lie is that CAA is not discriminatory. The Constitution has five provisions for citizenship and religion is not mentioned anywhere. Citizenship Act, 1955, also contains the same provisions," Sibal told reporters.

"India's Constitution says you cannot give citizenship on the basis of religion," he said, alleging that it was the prime minister and the home minister who were spreading lies on the issue and misrepresenting the provisions of the new law.

Sibal alleged that the government brought the new law deliberately in order to divert people's attention from key issues such as economy and price rise.

On whether the states need to implement CAA, he termed the question "academic" and said, "Attempts are being made to create a controversy out of nothing."

"I am sure that something will be done to make sure when the Supreme decides the matter, one way or the other, that will be the law of the country like the Ram Janmabhoomi," the Congress leader said.

Another lie being spread by the PM and the home minister is that CAA has no connection with the planned National Register of Citizens (NRC), Sibal alleged.

"In April 2019, Amit Shah had said the CAB will come first, followed by NRC. On December 9, 2019, he spoke of a nationwide NRC after passing CAB in the Lok Sabha. The link of CAA-NRC cannot be denied," the Congress leader said.

He said the third lie is that Modi said in a rally on December 22 that there was no discussion on NRC after he formed government.

"Whereas, in the President's address to the Joint Session of Parliament on June 20, 2019, NRC implementation primarily was announced."

"The fourth lie is that the process of NRC was neither notified nor is it legal. This is a complete lie because when NRC was adopted in 2003, article 14 (a) mentions it as being legal and that it will give identity card to every citizen of the country," he said.

Sibal said the government's claim that NRC is yet to begin is a "lie" as "NRC commencement notification has been issued effective April 1."

Claims that the National Population Register (NPR) has no relation with NRC is the "sixth lie", he alleged, adding, "The home ministry's 2018-19 annual report stated that, 'NPR is the first step towards implementing NRC'."

Sibal said the "seventh lie" is that no Indian needs to be scared and the "eighth" is what Modi said that there is no detention center in the country.

"As many as 988 people are imprisoned in six detention centers in Assam alone. In January 2019, the Government of India directed to set up Detention Centres," the Congress leader said.

He added the "ninth lie" was that no force was used against anti-CAA protesters.

"Is it the priority of the government to uplift people out of poverty or to get people involved in issues, which will destroy their lives and livelihoods.

When the economy is not functioning, when unemployment is at such a high level when our farmers are not getting anything, all that is being done is attempting to get foreign investment even by destroying the ordinary traders of this country," he alleged.

On the arrest of NRI businessman C C Thampi by the ED in a money laundering case, Sibal said, "When these protests are going on, what else will these people do?. These are all diversionary tactics. The most important thing is to deal with the concerns of our people."