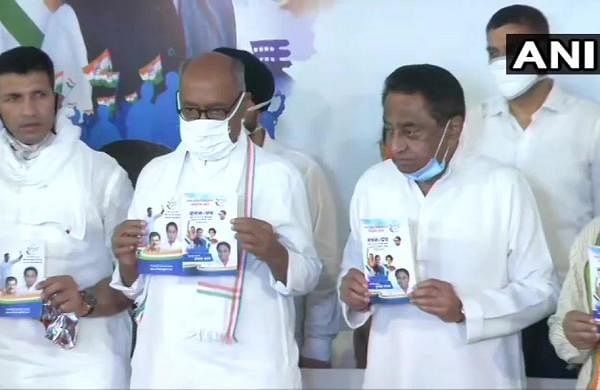 BHOPAL: Eyeing to bounce back to power after a gap of eight months, the opposition Congress released a 52-point Vachan Patra (manifesto) for the November 3 assembly by-polls to 28 seats in Madhya Pradesh.

The ex-CM and state Congress chief Kamal Nath also unveiled a document to prove that out of the 974 vachans (promises) made in the 2018 assembly polls, his government in 15 months' time had fulfilled 574 promises.

"Along with the 52 new promises made for the assembly by-polls, the 400 old promises which remained incomplete will also be fulfilled, after the BJP is thrown out of power by voters in by-polls, said Nath.

While reiterating its resolve for re-starting the farm loan waiver (stopped during the present BJP regime), the 52-point Vachan Patra had a slew of promises for those who have been hit hard by mismanagement of Covid-19 pandemic in the state.

"We consider the Covid-19 pandemic a disaster. The poor who plunged into a deep economic crisis will not be left hungry as adequate arrangements will be made for their food and health. All such families who have lost their earning members will see one of their surviving members get employment/self-employment," the Vachan Patra read.

The manifesto also promised to launch a social security scheme under which if the prime earning member of a family died due to due to COVID, his widow would be provided pension.

In other Covid-related issues, the Congress manifesto promised hiking honorarium of Asha and Anganwadi workers, who worked as Corona Warriors dedicatedly.

The party also promised that the fees of all competitive exams and recruitment tests held for unemployed youths during the pandemic will be borne by the government, while concrete efforts will be made to render employment/self-employment to all those who lost jobs.

Promising to resume the farm loan waiver scheme and 100 units of electricity for Rs 100, the party also promised to replicate Chhattisgarh's Gau Nyay Scheme with a Gau Dhan Seva Scheme in MP.

With 16 out of the 28 bypoll-bound seats being in the Gwalior-Chambal region, the manifesto mentioned series of promises for the region, including starting survey work for metro rail connectivity in Gwalior and adjoining areas. It also promised a policy for transforming the barren land in Chambal ravines into arable land and enabling agricultural and landless labourers to benefit from it.

Setting up new industrial units in the region by organising a conclave of reputed national and international industrialists and developing a new economic zone for setting up industries on both sides of Chambal Highway was also promised.

While reiterating opposition to the new farm laws of the Narendra Modi government, the manifesto maintained that those anti-farmer laws won't be implemented in MP.

It also promised to review the labour laws of the Modi government and ensuring that the interests of labourers aren't affected.

Making light of the Congress's 52-point new Vachan Patra, CM Shivraj Singh Chouhan said the Congress first needs to tell people why it failed to fulfill promises made in 2018 polls, including waiving off farm loan up to Rs 2 lakh.