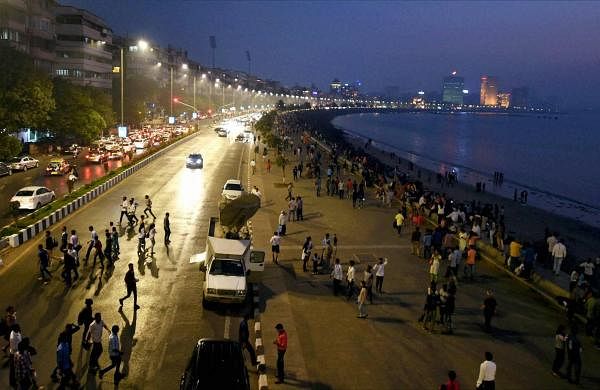 MUMBAI: The Maharashtra cabinet, on Wednesday, cleared the night life proposal allowing commercial establishments in non-residential areas of Mumbai - the ‘city that never sleeps’ - to remain open 24x7 from January 27.

Minister for tourism and environment Aaditya Thackeray and home minister Anil Deshmukh announced the decision that will let shops, hotels, restaurants and malls to operate 24x7.

“The Mumbai 24x7 proposal has been approved by the Cabinet today. From January 27, malls, multiplexes, shops and eateries in non-residential areas like Bandra Kurla Complex and Nariman Point can remain open 24x7,” Aaditya Thackeray said.

“In the Bandra-Kurla Complex and Nariman Point near NCPA, a lane will be opened for food trucks. Food inspectors will keep a watch on them. If rules on solid waste management, decibel limits and law and order are violated, there is a provision of a lifetime ban,” the Shiv Sena leader said.

“The decision doesn’t apply to pubs and bars as of now. Nightlife is much more than pubs and bars. We have not touched the excise department in the current decision. So, pubs and bars would be open only till 1.30 am as is the rule now. Other establishments like shops, multiplexes, hotels, restaurants and malls would run 24x7,” Thackeray added while explaining that “nightlife” won’t add to the existing burden of the Mumbai police.

"The police force will not be under stress because after 1.30 am, their job till now was to check if shops and establishments were shut down. But, now they will be able to focus on law and order only,” said the minister, who is the son of Chief Minister Uddhav Thackeray. He also said that the establishments would be asked to hire security services which would increase the income for the police.

“The decision has been made to increase employment opportunities and add revenue to the state exchequer. However, it won’t be a compulsion for anyone. Only those who feel they can do good business can keep their establishments open throughout the night,” he added.

“The decision will boost jobs and boost the economy,” Thackeray said while giving examples of nightlife in London.

“London’s night-time economy is 5 billion pounds,” Thackeray said adding that Mumbai too should not lag behind in providing similar facilities to people at night as the metropolis functions 24x7.

Thackeray had proposed Mumbai 24x7 a long time back. However, after the rooftop restaurant fire that killed several people in 2017, the proposal was dumped into cold storage.

The BJP had opposed the proposal from the beginning citing moral, security and policing issues. Even when the MVA government revived the proposal last month, BJP leaders had opposed it calling it a ‘freehand for pubs and bars’ and ‘a burden on the police’.

Denying the charges, Thackeray said those who opposed the proposal had not read it properly.