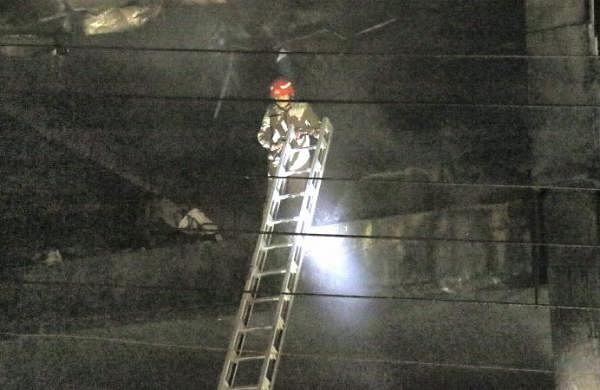 NEW DELHI: Opposition BJP and Congress on Saturday demanded a high-level inquiry into the Mundka fire tragedy and an increase in the compensation to the families of the victims.

The Delhi BJP sought a probe by a retired high court judge as it alleged laxity on the part of agencies concerned and a delay in providing timely help.

The party's Delhi unit president Adesh Gupta said if the fire tenders had reached the spot on time, many lives would have been saved. So far, 27 deaths have been reported in the blaze and officials said the toll could rise. "If cranes and ladders had arrived on time, people wouldn't have jumped from the roof," Gupta claimed.

Officials of Delhi Fire Services said that the firefighting and rescue work was affected due to heavy traffic and the congested location of the building that was engulfed in fire.

Leader of Opposition in Delhi assembly Ramvir Singh Bidhuri also asked for a probe into the alleged delay by fire tenders in reaching there and other violations.

"It should be investigated why the fire brigade arrived late. While the information about the incident was given at 4:40 PM on Friday, the people present there said that the fire brigade came late by an hour. Even the police had to carry out the rescue operation with the help of local people," Bidhuri claimed.

The BJP leaders, including Gupta, visited the site of the fire incident and met the kin of the deceased and injured. Party MLA Vijender Gupta and local MP Hans Raj Hans also visited the area.

Gupta claimed that about 100 people were feared dead in the fire at the building where at least 200 people were present at the time of the incident.

Delhi Congress leaders demanded that the AAP government increase the compensation amount for the families of the deceased to Rs 25 lakh and for the injured to Rs 5 lakh.

Chief Minister Arvind Kejriwal who visited Mundka announced a compensation of Rs 10 lakh to the kin of the deceased and Rs 50,000 for the injured. He also directed a magisterial probe into the incident.

Chairman of the communications department of the Delhi Congress Anil Bhardwaj demanded raising the compensation amount and said that the Delhi government should hold an inquiry as timely action could have saved many lives.

Party leader Parvez Alam alleged that corruption seemed to have taken place in giving the completion certificate to the building. "If there was no fire clearance, how was the building allowed to function as a commercial hub," he said.