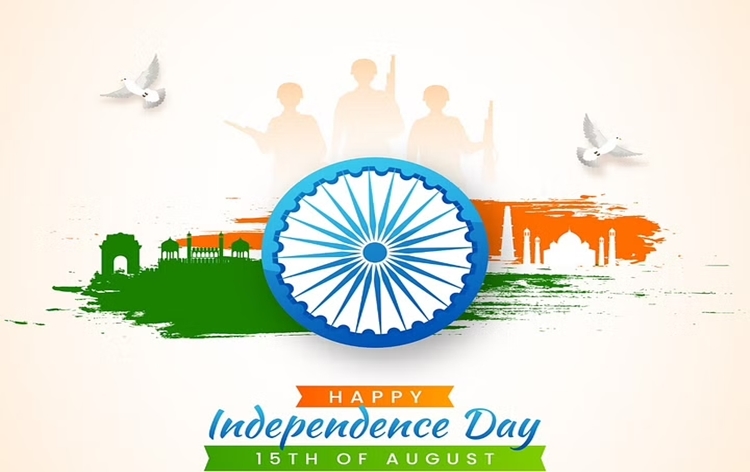 In his ceremonial address, the Prime Minister said that this Day is being celebrated not just in India, but in every corner of the world the Tiranga is flying with pride and honour. He called it a historic day saying this is an auspicious occasion to march ahead with new resolve. Mr Modi said there was not a time under foreign rule when India's sons and daughters had not struggled for her independence. He expressed gratitude to great leaders like Mahatma Gandhi, Netaji Subhash Chandra Bose, Dr BR Ambedkar and Vinayak Damodar Savarkar.

The Prime Minister said as the nation pays respects to freedom fighters, there is a need to remember their vision and dream for India during the Azadi Ka Amrit Mahostav. He said nation is grateful to Bhagat Singh, Rajguru, Ramprasad Bismil, Rani Laxmi Bai, and all other freedom fighters who shook the foundations of the British Empire. He also saluted the architects of free India including Jawaharlal Nehru, Ram Manohar Lohia and Sardar Vallabhai Patel. He highlighted that India has been home to great thinkers like Swami Vivekanand, Sri Aurobindo and Gurudev Rabindranath Tagore. He added that Adivasi freedom fighters such as Birsa Munda, Tirot Singh and Alluri Sitarama Raju played a pivotal role in keeping the freedom struggle alive in every corner of India.

Prime Minister emphasised that for growth of New India, there is a need to ensure inclusive development across the nation. He said this was a vision held dear by Mahatma Gandhi. Mr Modi said that based on the philosophy of Gandhiji, government is working towards empowering every Indian at every corner of the nation, be it Dalit, women, farmers, or Divyang. He said an aspirational society is important for any nation and expressed pride that these aspirations are present in every household in India. Mr Modi said this Amrit Kaal has provided a golden opportunity to fulfill the dreams and goals of this aspirational society. He exuded pride that there is an increase in common consciousness of the love for the nation. He said Har Ghar Tiranga has been an example of the entire nation coming together to celebrate the spirit of this glorious country.

Mr Modi said COVID has been an example of this common consciousness, where citizens came together. He said the nation stood together from supporting doctors to propelling research to taking vaccines to the remotest parts. He said the world today looks at India with pride, hope and as a problem solver. He added that the world looks at India as a destination where aspirations are met. He said Sabka Saath, Sabka Vikaas, Sabka Vishwaas and Sabka Prayaas became the cornerstone of ensuring implementation of pro-nation policies and taking development to the last mile. He said when there is stability in governance and fast decision making, the spirit of Jan Bhagidari prevails for nation's development. The Prime Minister said that as India celebrates 75 years of Independence, there is a need to now move with a renewed focus and resolve for the next 25 years. He said this can be made possible through the strength and determination of 130 crore Indians. He said everyone has to work with the vision of accomplishing what nation's freedom fighters dreamt of, by 100 years of independence.

Prime Minister said that for the next 25 years, there is a need to focus on Five Resolves. These are Developed India, Removing every ounce of Slave Mentality, Pride for glorious heritage, Unity and Fulfilling Citizen's Duties. He urged the youth to dedicate the next 25 years of their lives for the development of the nation. He expressed happiness that from renewable energy to increasing infrastructure for medical education, India has improved on every front. Mr Modi stressed on the need to break free from the shackles of slave mentality. He said that sometimes talent is restricted by language barriers and called it an example of Imperialism. He said there is a need to be proud of every language in the country. Prime Minister said people can only fly high when they are connected to their roots. He said that when India flied high, she can provide solutions to the entire world. He said Nature has been a pivotal part of India's heritage and country has traditions and practices that will help in combating climate change. He said the Unity in Diversity in India is something to be very proud of. He said people should go ahead with the motto of India First and hold on to this thread of Unity. (AIR NEWS)