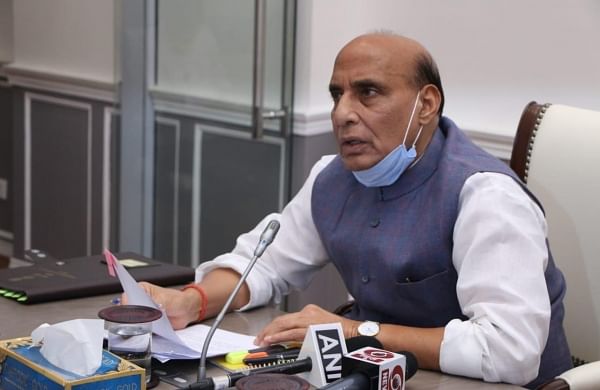 NABINAGAR: Union minister Rajnath Singh Thursday exuded confidence that the NDA will form a government in Bihar with a two-thirds majority, saying the coalition has fulfilled almost all its promises during its 15-year rule in the state.

Addressing three election rallies at Barh (near Patna), Nokha (Rohtas) and Nabinagar (Aurangabad) he attacked the RJD, saying the "lantern era" has ended with every house getting power supply.

Lantern is the poll symbol of the RJD. The NDA in Bihar has the BJP, the JD(U), the HAM and the Vikassheel Insaan Party (VIP) as its constituents.

Highlighting the centre's pro-farmers approach, he said "Under the Kisan Samman Nidhi, every farmer of the country is being given Rs 6000 as annual income support. Now the money of the Central schemes is going directly to the public. Being the son of a farmer myself, I want to assure you that you will get the Minimum Support Price (MSP)."

He said Indias stature has risen across the globe, and the credit should be given to Prime Minister Narendra Modi for this.

"He thinks about the village, the poor and the farmer," Singh said of the PM.

He said Chief Minister Nitish Kumar has fulfilled most of the promises during the 15 years rule of the NDA in the state.

"The NDA is the best option for the people of Bihar. It is going to form a government in the state with a two-thirds majority," he said. Bihar has a 243-member assembly.

"Our Prime Minister has a 56 inch chest, the ability to take risks. A strong fight is going on against terrorism. Terrorism will be wiped away. We deliver whatever we promise. We abrogated Article 370. Also a grand Ram temple is coming up," he said, underlining the BJP walking the talk on its poll promises.

In his rally at Nasriganj Higher Secondary schools ground in Rohtas Sasaram, he said, "The People of Bihar used to think, they will never get power.

"The lantern has been broken, its fuel spilled on the ground, also the panja (the Congress poll symbol) has failed and their game is over."

He said things have changed a lot over the past 15 years in Bihar.

"Don't want to claim that Nitish Kumar and his deputy Sushil Kumar Modi have turned Bihar into heaven. But can certainly say Kumar has done much better compared to the past governments. The roads have improved, several big bridges have come up. By 2022, nobody will be left without a pucca house in the country," he said.