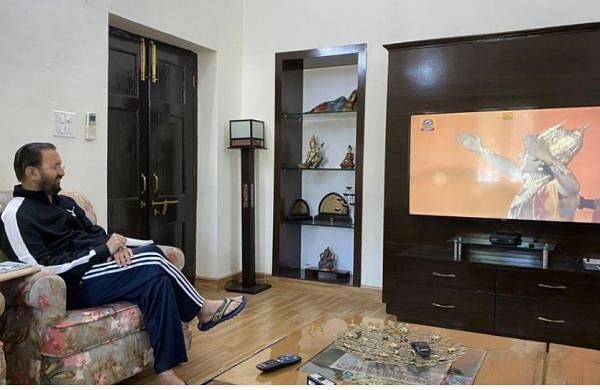 NEW DELHI: After a pre-telecast began of Ramanand Sagar's iconic epic serial 'Ramayan', Union Minister for Information and Broadcasting Prakash Javadekar on Saturday watched the first episode sitting at home after the lockdown imposed in the country.

On Saturday, when the telecast of the hugely popular serial began at 9 a.m., the minister sat with his family in front of the TV to watch the mythologocal epic.

Javadekar has asked all cable TV operators to carry Doordarshan which is re-telecating the Ramayan series.

Javadekar had said the epic series is being telecast on public demand as most of the citizens are at home due to the nationwide lockdown.

"Happy to announce that on public demand, we are starting re-telecast of 'Ramayana' from tomorrow, Saturday March 28 in DD National, One episode in morning 9 am to 10 am, another in the evening 9 pm to 10 pm," Javadekar had tweeted.

However, netizens on Twitter were not amused by Javadekar's tweet for ignoring migrant labourer's plight who have been walking hundreds of kilometres on foot to reach their villages.