New agriculture laws an attack on soul of every farmer: Rahul Gandhi 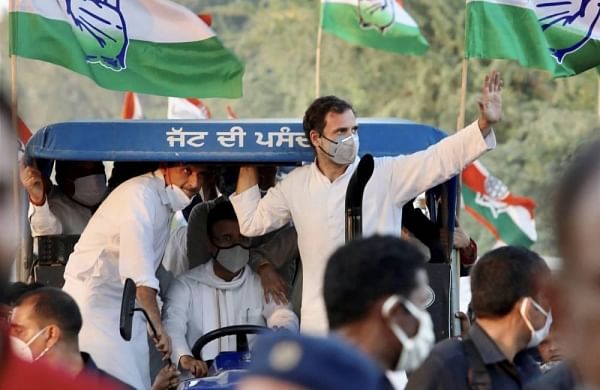 CHANDIGARH: Congress leader Rahul Gandhi on Saturday said the voice of farmers was gagged in Parliament, but it will now resonate in the Punjab assembly and echo in every part of the country till the central government is froced to withdraw the farm laws.

During the digital launch of the second phase of the Smart Village Campaign from Delhi, Rahul assured his party's full support to all panchayats, farmers and farm labourers in their fight against the new legislations.

If these laws were in the interest of the farmers, why didn't the NDA government at the Centre allow a debate on them in the Lok Sabha and the Rajya Sabha, the Congress MP questioned. Representatives of all the village panchayats in Punjab participated in the virtual launch programme.

Condemning the central legislations as ill-conceived and unconstitutional, Rahul said, "These three laws are an attack on the soul of every farmer of this country, on their sweat and blood. Every farmer and labourer is feeling the pain of this attack."

He lashed out at the BJP for 'imposing' the laws without taking people into confidence. Terming the farm land as the foundation of every village, Rahul said that the Congress will not allow India’s foundations to be weakened.

"If we weaken country’s foundation, India will be weakened…When the Congress party fights, we do that to protect and strengthen the foundation. This is the difference between us and the central government… they thrust schemes from the top without talking to the panchayat and the people and their laws weaken India’s foundation," he added.