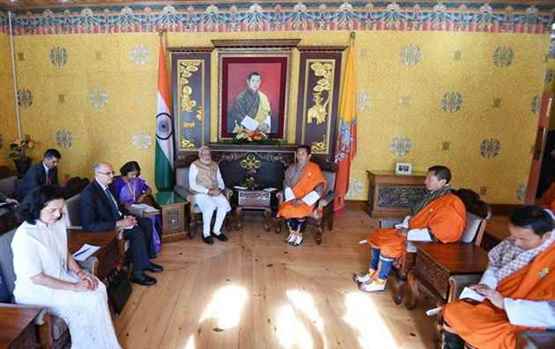 India and Bhutan have agreed to take the bilateral ties to new heights and take the cooperation beyond the hydropower sector. The resolve came during Prime Minister Narendra Modi's meetings with the Bhutanese leadership.

Briefing media in Thimpu, about Prime Minister Narendra Modi's engagement with the King, the Fourth Druk Gyalpo and Prime Minister Dr Lotay Tshering, Foreign Secretary Vijay Gokhale said that there will be three pillars of the relationship between the two countries which is enduring nature of partnership based on mutual interest and trust.

He said, they desired to strengthen science, technology and education links. He said, India will be happy to assist Bhutan in the health sector which is its priority. Mr Gokhale said, the first day of Mr Modi was very fulfilling.

Earlier, Mr Modi held talks with his Bhutanese counterpart Dr. Lotay Tshering in Thimpu yesterday. They reviewed the entire gamut of the bilateral relations and ways and means to further enhance it.

The two leaders had one to one as well as delegation-level exchanges. Later both the leaders launched various projects. Prime Minister Narendra Modi and his Bhutanese counterpart Dr Lotay Tshering at Simtokha Dzong in Thimpu inaugurated Mangdechhu hydroelectric power plant.

They released a commemorative stamp to mark the 50 years of Indo-Bhutan hydro-power relations. Both the leaders also unveiled the Inauguration Plaque of the Ground Station for South Asian Satellite.

Prime Minister Modi launched RuPay Card in Bhutan by making a purchase at Simtokha Dzong. The two sides also signed ten MoUs in the field of science, technology, engineering and other sectors.

Later in a press statement, Prime Minister Narendra Modi said that the people of the country has given his government a huge mandate thus providing once again an opportunity to further strengthen the relationship between India and Bhutan.

He said, Bhutan has a special place in the hearts of 130 crore Indians. He said, it is a privilege of India that it is a major partner in the development of Bhutan and its cooperation in Bhutan's five-year plans will continue taking care of Bhutan's priority.

Mr Modi also announced to enhance the supply of LPG from India from 700 to 1000 Metric Tonnes per month to ensure clean fuel in villages. He said, India is committed to accelerating the development of Bhutan using space technology and in this direction, earth station of South Asia satellite was inaugurated yesterday.

It will increase coverage of communication, public broadcasting and disaster management in that country.

Bhutanese Prime Minister mentioned about Mr Modi's first visit to Bhutan in 2014 and quoting him that he remembered him saying that Bhutan and India are close, not because we have open borders, but because we have opened our hearts to each other. He said, Mr Modi's visit this time shows how much he means it.

Prior to this, Prime Minister Narendra Modi received the audience with the King of Bhutan Jigme Khesar Namgyel Wangchuck. He inspected the Guard of honour at Tsshichhofzong, the Presidential Palace in Thimphu.

Mr Modi arrived in Paro on a two-day state visit to Bhutan yesterday. He was received at the Paro airport by the Bhutanese Prime Minister along with several senior ministers.

Our Correspondent covering the Prime Minister's visit reports that children and youth queued up with Indian and Bhutanese flags along most of the 50 Kilometre-long road from Paro and Thimphu to greet Mr Modi. (AIR NEWS)