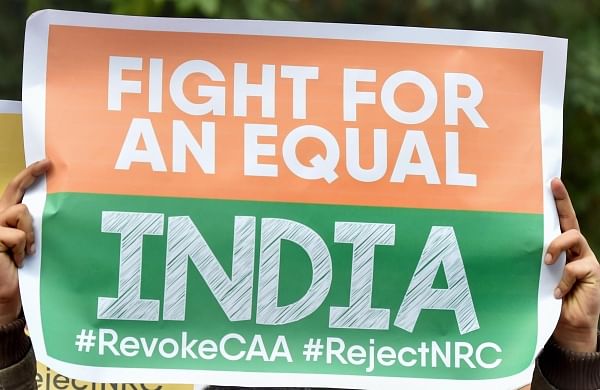 NEW DELHI: An NGO has moved the Supreme Court seeking that the Citizenship (Amendment) Act (CAA) and the government notification on the exercise for preparing National Population Register (NPR) be declared "unconstitutional".

The plea has been filed by 'Minority Front' seeking striking down of the NPR provisions.

The plea alleged that the CAA grants citizenship based on religion, makes "unreasonable classifications" and is against constitutional morality and basic structure of the Constitution.

The said that though CAA states that the government's objective is to protect minorities facing religious persecution in countries with a state religion and which were a part of undivided India, it still excludes Sri Lanka and Bhutan which have Buddhism as its state religion.

It also questioned the inclusion of only three neighbouring countries in the purview of the Act and the exclusion of Jews, Muslims, and atheists from the list of communities being given protection under CAA.

"It is submitted that the inclusion of the six communities and the discrimination against Jews and Muslims in the Impugned Act is based on religion which is based on the intrinsic choice of an individual and hence, an impermissible classification," the plea said.

The petition said the CAA cannot be seen in isolation but will have to be seen "chronologically with the government's notification to prepare the NPR followed by an eventual nationwide National Register of Citizens (NRC)".

"The Act has to be read comprehensively with the other provisions of law particularly the Citizenship (Registration of Citizens and Issue of National Identity Cards) Rules, 2003 which provide for the identification of illegal migrants from citizens through the preparation of a National Register of Indian Citizens (NRIC popularly known as 'NRC')," the petition said.

The plea said that the government is required to comply with the Global Human Rights Regime and the International Covenants while drafting municipal laws.

"The court has already approved the interpretation which abides by India's international obligations especially on issues of human rights.

In this regard, the principles of Customary International Law assume special importance," the petition said.

The top court had on December 18 issued notice to the Centre and sought its response by the second week of January on a batch of pleas challenging the CAA's legality.

The CAA, which was notified on January 10, grants Indian citizenship to non-Muslim minorities migrated to India from Afghanistan, Pakistan and Bangladesh till December 31, 2014, following persecution over their faith.

The apex court had fixed January 22 for hearing a total of 59 anti-CAA petitions, including those filed by the Indian Union Muslim League (IUML) and Congress leader Jairam Ramesh.

The petitions challenging the constitutional validity of the Citizenship (Amendment) Act, 2019, before the court include those filed by RJD leader Manoj Jha, Trinamool Congress MP Mahua Moitra and AIMIM leader Asaduddin Owaisi.