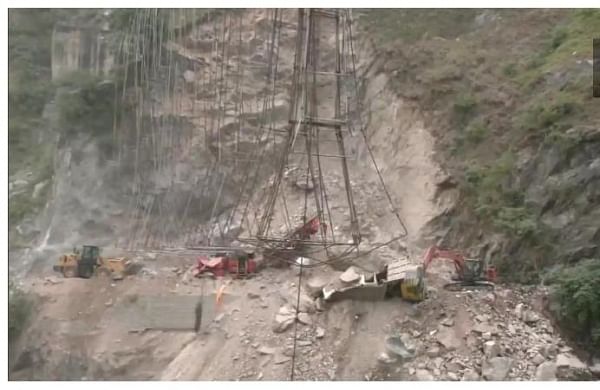 SRINAGAR: At least nine labourers are trapped after a portion of the tunnel on Srinagar-Jammu national highway collapsed in the early hours of Friday.

According to an official of J&K Disaster Management, around 10.15 pm on Thursday, the audit tunnel of T3 on the highway near Khooni Nallah in Ramban collapsed, trapping at least nine labourers including two locals and seven migrant workers.

"The rescue operation started at midnight and was going on in full swing with rock breakers being used to reach the trapped people," he said,

SDRF, police and local administration have launched the rescue operation. Heavy machinery has been rushed to the spot to rescue the trapped labourers.

Union minister Jitendra Singh termed the collapse as "unfortunate". "I'm in constant touch with DC Mussrat Islam. Nearly 10 labour workers were trapped under the debris. Another two were rescued and hospitalised with injuries. Rescue operations going on in full swing. Civil administration and police authorities are monitoring the situation," he said.

Deputy Commissioner of Ramban Massaratul Islam and Senior Superintendent of Police Mohita Sharma are at the spot along with the deputy inspector general of police, supervising the rescue operation.