'No follow-up results' after meeting with PM Modi: Farooq Abdullah 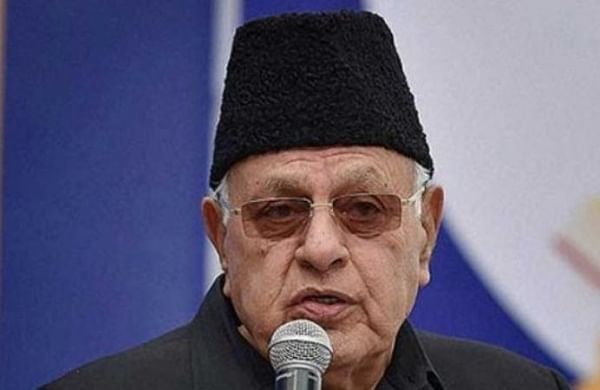 SRINAGAR: A month after Prime Minister Narendra Modi's outreach to mainstream leaders of Jammu and Kashmir, National Conference president Farooq Abdullah said on Sunday that there has been "no follow-up results" on the ground.

Abdullah said this in reference to the prime minister's remarks at the June 24 meeting in New Delhi that he wanted to win the hearts of the people of Jammu and Kashmir and remove "Dilli ki doori" (the distance from Delhi) and "dil ki doori" (distance between hearts).

"That was a welcome statement but there is no effort on the ground to win the hearts of the people.

People continue to be locked up and dissent is not tolerated. We want to see the change on the ground, a visible effort to win back the people who went through the trauma of their state being dismembered, its special status removed in one sudden blow," the three-time former chief minister told PTI here.

"We are yet to see any follow-up results even after a month," he said.

"Trust is something that has been missing from both sides (Delhi and Srinagar). Successive prime ministers -- Jawaharlal Nehru, Narasimha Rao, Atal Bihari Vajpayee -- made promises but the trust deficit has persisted," he added.

The 83-year-old veteran politician said that he and his party had attended the Delhi meeting because it was an invitation from the prime minister although he had no expectations from it.

Yet, he had hoped for steps to win the hearts and minds of people but nothing had happened.

Abdullah insisted that restoration of "full, undiluted" statehood to Jammu and Kashmir should precede the elections to its Assembly.

All major parties have demanded that and the Centre should prove its bona fide by agreeing to that.

Asked if his party would take part in the elections if the statehood was not granted before that, the NC president said, "We will decide at that time when the bugle is blown. We will then sit down and decide what we should do."

In reply to a question about the fate of the People's Alliance for Gupkar Declaration (PAGD), a conglomerate of six mainstream political parties including the NC and its arch-rival PDP, Abdullah said the alliance stands and "we are together. We all are there. We haven't left."

He said the alliance was cobbled up together in a hurry when the special status of Jammu and Kashmir was abrogated on August 5, 2019.

"We all are like-minded people who joined together to work for restoration, knowing fully well that under this government it will not be restored."

"But we will continue to fight democratically and legally. People after us will also stand and try and work for the restoration of this," he said.

Abdullah also pointed out that earlier this month the Delimitation Commission came to Jammu and Kashmir and no members of Parliament, who are its associate members, were invited to sit and watch the proceedings.

Abdullah, who currently represents Srinagar in Parliament, urged the opposition national political parties to "forget" their plans and standings and get together to put the pillar of democracy far more strongly because the "time is running out".

"The tragedy with India is that the opposition is divided and unless they unite for restoration of democracy and forget their own party plans and party standings, we will never be able to get our democratic structure back.

"And I think efforts are being made, I see they are trying to get together and I hope it does happen soon because time is running out," he said.

The National Conference was part of a gathering at the residence of Nationalist Congress Party chief Sharad Pawar on June 22, two days before Prime Minister Modi chaired the meeting with leaders from Jammu and Kashmir.

The meeting at Pawar's residence was called "non-political" but an interaction of like-minded people by CPI(M) leader Nilotpal Basu who was among the participants.

To a question whether he would be playing a role in binding the opposition parties across the country together, Abdullah said, "All, whether you are in south, east, west or north, we all have to get together, aim to strengthen democracy, to put the pillar of democracy far more strongly. This will happen because it is the need of the hour."

Abdullah, who was detained under the stringent Public Safety Act after the Centre abrogated special status of the erstwhile state and bifurcated it into two union territories, said the biggest problem today was the COVID-19 pandemic which shut everything down, bringing the political process "really to a naught".

Now that things have started to improve and Covid is under control, "you will see political activity on a much bigger scale. I am sure as the things improve the political parties will meet and draw strategies for the future."

He referred to the demand made by all leaders at the June 24 meeting for making a level-playing field allowing the political parties to perform their duties and ensuring security.

"Forget about reviewing the security. I can tell you that some more leaders have lost their security after the meeting. Whereas their people, who don't have any standing with the people, have all the security, all the vehicles and then they say we are just.

"Where is justice? "We have shown them even when we were locked up in the local body elections without getting to the people, still people voted for us in huge numbers which has shaken them," he added.

Abdullah, his son Omar Abdullah, Congress leader Ghulam Nabi Azad and PDP chief Mehbooba Mufti -- all former chief ministers -- were part of the 14-member delegation from Jammu and Kashmir to attend the meeting with the prime minister.