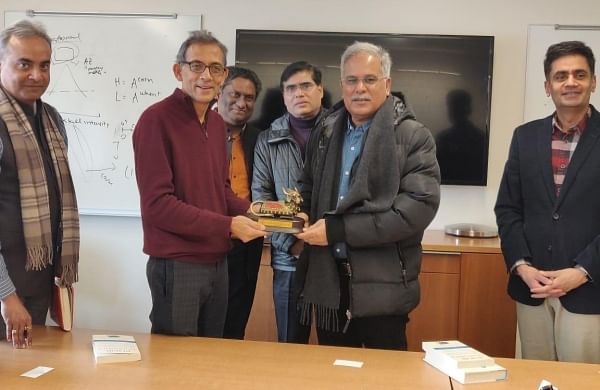 RAIPUR: Nobel laureate Abhijit Banerjee, appreciating the innovative people-oriented development schemes launched by Chhattisgarh, will be visiting the state in July this year to observe their performance.

Chief Minister Bhupesh Baghel, who is on a 10-day visit to the United States along with the state officials, congratulated Banerjee on winning the Nobel Prize and apprised the Indian-born American economist about the various experiments executed through various schemes undertaken in Chhattisgarh state for economic development.

“During the course of the meeting held at Massachusetts Institute of Technology (MIT) Boston in US, the CM Baghel shared details on innovative programme of Narwa-Garwa-Guruwa-Badi Narwa aiming to boost the rural economy, Haat Bazaar clinic yojana, Suposhan (nutrition) campaign and other programmes.

Professor Banerjee praised the state’s initiatives and on the request of the chief minister agreed to visit Chhattisgarh in the month of July to see the novel schemes," the official spokesperson told the Express.

Banerjee expressed his inclination to look through the unique experiments pioneered by the government as he suggested the state on identifying special regions through cluster approach for economic decentralisation and monitor them.