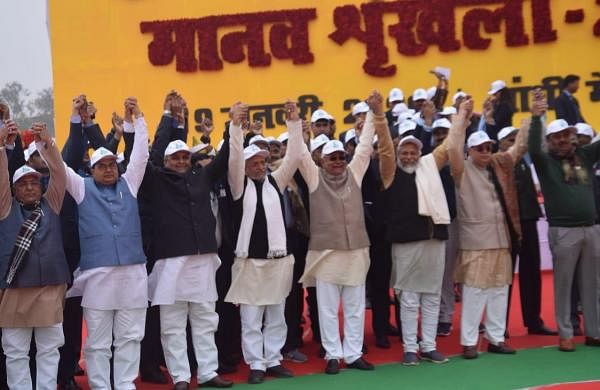 PATNA: Millions joined hands in Bihar on Sunday to set a world record of forming an 18,000-km long human chain in the state.

Nitish Kumar, accompanied by deputy CM Sushil Kumar Modi and other NDA colleagues, participated in the human chain at the Gandhi maidan and thanked the people of the state for their spontaneous turnout.

"The credit goes to the people of Bihar, who exceeded the target of 4.27 crore with 5.16 crore people forming 18043-km longest human chain", an elated Nitish Kumar said before the media.

Earlier, the human chain was estimated to be around 16,351-km long with the estimated participation of around 4.27 crores people.

People started coming out on the streets surcharged with festive cheers since 10 am and by 11.30 am almost all highways and roads of the state were seen flooded with a sea of humanity.

At the Gandhi maidan, thousands of people including school and college students enthusiastically formed the human chain resembling the state map with CM Nitish Kumar and others.

"It has become virtually a kind of meaningful day by forming a chain for causes and showing collective concerns towards issues like climate change and other social evils",said a senior IPS officer Dr Kamal Kishor.

A bevvy of 15 choppers took many sorties in the sky of Bihar and captured aerial views of human chain.

Besides choppers, 200 drones were also used for capturing the views of human chain.

According to a report, people residing in Nepal's areas sharing border with India also participated in it.

Official sources said that 13 lakh slogans were written for awareness of issues covered in the human chain.

A water activist Rajendra Kumar Singh handed over a pot filled with water at Gandhi maidan to honour Kumar's concerns on social and environmental issues.

Meanwhile, Opposition parties attacked the government for exploiting the state machinery for the human chain event.

RJD leader Tejashawi Yadav told the media that he would have appreciated if the CM had organised a job chain for youths instead of spending crores on a human chain.

He alleged that children of schools were used in the chilly weather and transported in tractors and other vehicles.