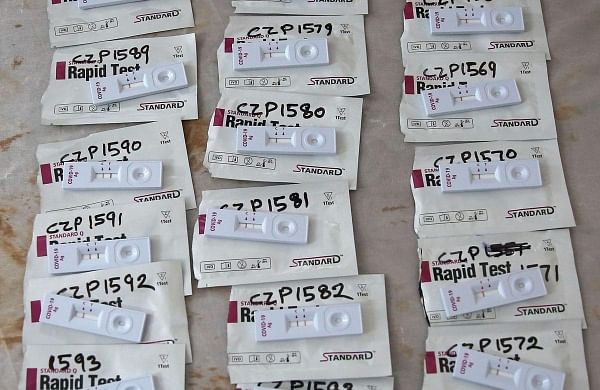 NEW DELHI: The "out of reach" testing service offered to Bollywood actor Amitabh Bachchan’s family has brought to the fore a major flaw in the Covid-19 testing strategy devised by the ICMR (Indian Council of Medical Research).

After senior Bachchan and his son Abhishek tested positive for Covid following the onset of mild symptoms, other members of the family — actor Aishwarya Rai Bachchan and her daughter Aradhya — who did not have symptoms tested negative through the rapid antigen test, the first line of testing. Later, they underwent RTPCR test.

In the RTPCR test, the duo, who had no symptoms, was found to be Covid positive.

Considered the gold standard for detecting Covid-19, the RTPCR test is now offered to only the symptomatic patients in most parts of the country.

The ICMR on June 23 had recommended that RTPCR test should now be carried in only those with clear symptoms of the disease who test negative through a rapid antigen test -- a move that, say experts, could severely hamper the country's outbreak management efforts and lead to higher mortalities.

In recent weeks, however, it seems that many states, including Maharashtra and Delhi – are relying excessively on antigen tests which are faster and more convenient testing options but have way lower sensitivity than RTPCR tests.

In other words, it means that they give too many false negative tests — like what happened in the case of Aishwarya and Aradhaya. While the validation by the ICMR and AIIMS, Delhi found that the test will miss 30-50 per cent actual cases, in field conditions it's turning out to be the upper limit.

Experts point out that because of this limitation, Covid-19 containment efforts could get hampered majorly.

“While antigen tests have tremendous merits for running a fast triage which is helpful both for rapid tracing and early treatment, its limitations have to be kept in mind for optimal use,” said Ghaziabad-based infectious disease expert Dr. Anupam Singh.

In Delhi too, as government figures reveal, while at one point the test positivity rate had touched a whopping 40 per cent -- it dropped swiftly to under 10 once testing was increased and antigen tests were introduced last month.

As per experts, while offering testing to anyone who needs it is a good idea -- the testing protocol has to be open and "smart".

“In order to show lower positivity rates it may have been decided to retest only symptomatic but as -- we now know 30 % of COVID patients will never develop— the current strategy mow means that they l never get diagnosed and will keep spreading the disease to others,” he pointed out.

There is growing evidence that Covid-19 is a disease of indoor and closed crowded spaces and once someone in the family has it, the chances of others in the household getting it are the highest.

“Therefore retesting only symptomatic negative patients by RTPCR is a wrong move and direct or high-risk contacts who are negative on rapid antigen test must be retested as they have a high probability of infection as well since they can spread it into the community at large,” said Dr. Singh.

What Singh said was echoed by a senior epidemiologist based in Delhi who did not wish to be named. “The WHO has been stressing the testing-tracing and treatment strategy to combat the pandemic and any efforts to manage the outbreak will be seriously marred if the crucial link to test everyone who is suspected to have the disease is missing,” he said.