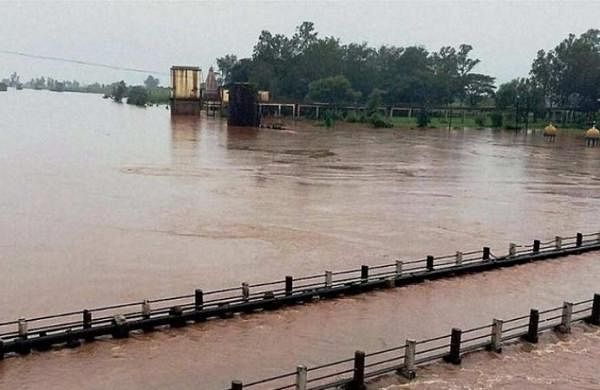 KOLHAPUR: The Panchaganga river in Kolhapur district of Maharashtra is still flowing above the danger mark, but the rise in water level is slow and steady due to discharge of water from a dam, officials from the local administration said on Friday.

According to the officials, the water level of the Panchganga at the Rajaram weir (barrage) as on Friday morning (at 7) was at 44.7 feet, which is above the danger mark.

"The water level reached the danger mark (at 43 feet) on Thursday around 4 pm. Since then, the rise of water level at the Rajaram weir has been slow but steady," said a duty officer at the district disaster management cell.

He said the intensity of rains in the district has reduced, but intermittent showers are continuing.

"The reason behind the steady and slow rise in the water level of the Panchganga is discharge of water from the Radhanagari dam, which is filled to capacity due to rains in its catchment areas," said the officer.

Four gates of the dam, built on the Bhogawati river in Kolhapur district, has been opened so far to release excess water, he said.

As the water level was rising in the Panchaganga on Thursday, the district administration had shifted some 1,750 families from 23 villages to safer places.

"So far 4,413 people from 1,750 families in 23 villages in Gadhinglas, Panhala, Karveer, Gaganbawda, Ajara tehsils and Kolhapur city have been shifted," district collector Daulat Desai had said.

The National Disaster Response Force (NDRF) has already deployed four teams in Kolhapur district to deal with any situation.

In Sagali, the district administration said it has distributed safety kits in 20 flood-prone villages.

The kits include life jackets, rope, torch and bag, among other things.