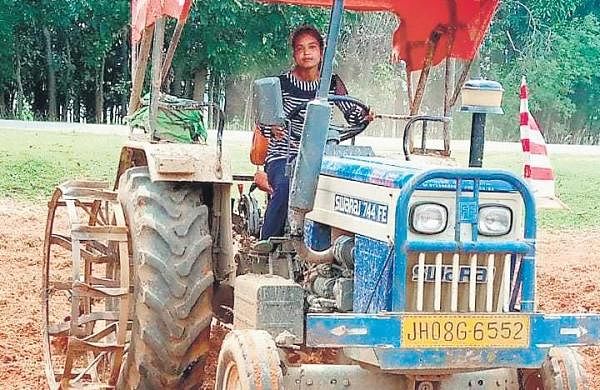 RANCHI: The village Panchayat in Jharkhand’s Gumla district, which had ‘banned’ 22-year-old Manju Oran from ploughing her own land, and tried to impose a fine on her for tilling the land using a tractor, withdrew the diktat against her on Sunday.

The turnaround happened after the local administration responded to media reports and held a meeting with the panchayat officials, convincing the villagers that drought is not caused by a “bad omen” of a woman tilling the land, and urging them to dispel the superstation.

Manju is now happy that she will be able to chase her dreams due to the intervention of the local administration. She also thanked media for raising the issue. “More than 250 villagers, who attended the meeting with the local administration, agreed that they will not oppose the agricultural activities being conducted by me anymore,” said Manju, adding that she wants to work in this sector so that nobody has to migrate to other districts or states for employment.

It took the officers four hours to convince the villagers to allow Manju to carry on with the agricultural work. “We tried to make the local residents understand that in this modern age, there is no place for such superstitions,” said Aditya Chaudhary, the officer in charge of Sisai police station.

“We told them that women have been ploughing land in several parts of the country using tractors, and financially supporting their families,” he added. They also succeeded in educating the villagers about how drought is a natural phenomenon.

The local police also warned the villagers that strict legal action will be taken if anybody is found troubling Manju while she works in the fields.

Manju, who is pursuing her graduation in Sanskrit, is recognised as a progressive farmer in the region who has been successfully practicing farming on her own since lockdown was imposed in the country.

Recently, with the profit earned from agricultural activities, she purchased a second-hand tractor for cultivating a 10-acre patch of land taken on lease for growing vegetables at Dahu Toli in Sisai block of the district.

However, she was barred by members of the village panchayat, who said ploughing the field is an activity meant exclusively for men. According to the villagers, it is a bad omen if a woman tills the land, since the practice may bring about drought or pandemic to befall on the region.