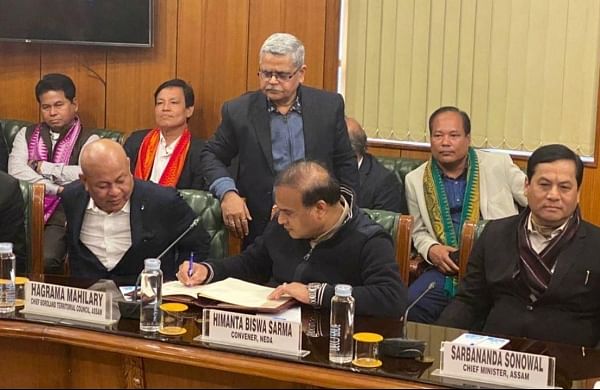 GUWAHATI: Assam minister Himanta Biswa Sarma on Monday said the Bodo Peace Accord signed in New Delhi on Monday will lead to a "full and final" solution to the decades-old Bodo issue.

In a tweet, Sarma said the Bodo Peace Accord has "full support" of the Assam government led by Chief Minister Sarbananda Sonowal and Bodoland Territorial Council (BTC) Chief Sri Hagrama Mohilary, "making it a full and final solution to the over decades-old Bodo issue".

"The BodoAccord shall reaffirm the territorial integrity of Assam and at the same time usher us into a new hope of peace and progress in Bodoland," Sarma, also the North East Democratic Alliance (NEDA) convenor, added.

He also thanked all those who made the "historic" accord possible which, Sarma said, was signed with the "blessings" of Prime Minister Narendra Modi and under the "leadership" of Union Home Minister Amit Shah.

The accord was signed by leaders of all the four factions of the NDFB, All Bodo Students Union (ABSU) chief Promod Boro, BTC chief Hagrama Mohilary, Sonowal, and Sarma.

The government on Monday signed the accord with one of the dreaded insurgent groups of Assam -- the National Democratic Front of Boroland (NDFB) -- providing political and economic bonanza.