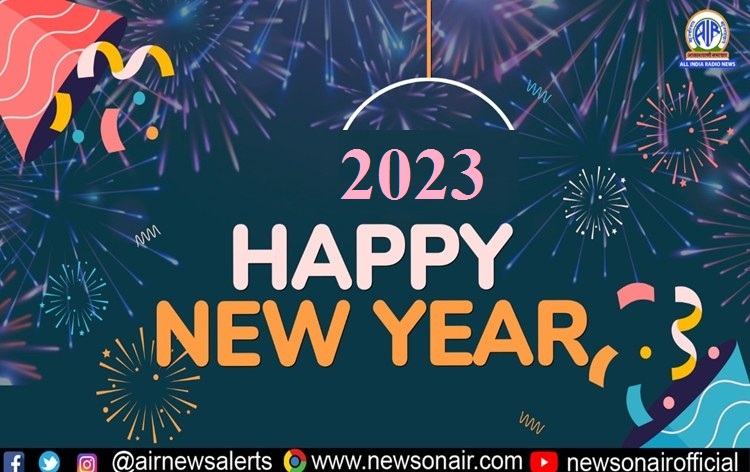 With dazzling fireworks and electrifying music, cities across India welcomed the year 2023 with much pomp and show. From Delhi to Mumbai and Chennai to Kolkata, the mood on the December 31st night was like a merry-go-round.

In Delhi, people in large numbers gathered at India Gate to celebrate New Year. Excitement was on the rocks in Mumbai, the 'city of dreams' where people were swaying to the exhilarating musical extravaganza at the pubs. Goa turned into a utopia of merriment with beaches dazzled with colourful lighting.

In Kerala, thousands gathered on the beaches, hotels and tourist spots to welcome 2023. In Kochi, people flocked the Parade Ground at Fort Kochi to witness the ritual of burning the 40 ft tall effigy of Pappanji, a grandfatherly figure made out of iron bars and cotton clothes. The burning symbolises bidding good-bye to the past and usher in the New Year.

In Uttarakhand, people celebrated the arrival of the New Year with dazzling lights, music and dance in Mussoorie. Similarly, a huge crowd emerged at Mall Road in Himachal Pradesh's Manali to welcome the New Year. In Odisha's Puri, renowned sand artist Sudarsan Pattnaik created an 8-feet high and 15-feet long sand sculpture of Lord Jagannatha at Puri beach to welcome the New Year.

President Droupadi Murmu and Vice President Jagdeep Dhankhar have greeted people on the occasion of New Year 2023. In a message, the President hoped that the New Year will bring new happiness, goals, inspirations and greater achievements in everyone's lives. President Murmu urged people to rededicate themselves to the unity, integrity and inclusive development of the nation. She wished for the progress and prosperity of the glorious nation and the people in 2023.

In his message, Vice President Jagdeep Dhankhar said, this joyous occasion is an opportunity to continue our efforts with greater vigour ensuring the upward growth trajectory. Mr Dhankhar said, the nation that is on rise as never before, is a favored global destination of growth, opportunity and investments. The Vice President has appealed to people to usher in the new year with a resolve to take India to greater heights of progress and prosperity.

Cheerful crowds released balloons in Tokyo, Japan to the first strikes of the new year, as people in Seoul prayed and lit up the sky with their phones as they bid farewell to a painful year. Russia and Ukraine have marked the start of 2023 with Putin raising a glass surrounded by soldiers, and Zelensky thanking Ukrainians for the war effort.

The UAE attempted to break two Guinness World Records by featuring 452 pyro drones and 15,000 nano lights, colours and shapes in their fireworks display in Abu Dhabi. Dubai’s Burj Khalifa, the tallest building in the world, saw a stunning fireworks display to welcome 2023. Mosul and Baghdad saw spectacular firework displays to welcome the arrival of 2023. Reports of revelling fireworks explode over Cairo.

Singapore welcomes the new year with a dazzling firework display outside the iconic Marina Bay Hotel. People also celebrated New Year in Taiwan, as fireworks lit up the skyline from the Taipei 101 building. Fireworks also lit the sky over the Chao Phraya River in Bangkok, Thailand as the clock struck midnight. Reports of New Year revelling and fireworks are also pouring in from Cairo, Athens, Barcelona, Nairobi and many other cities of the world. (AIR NEWS)