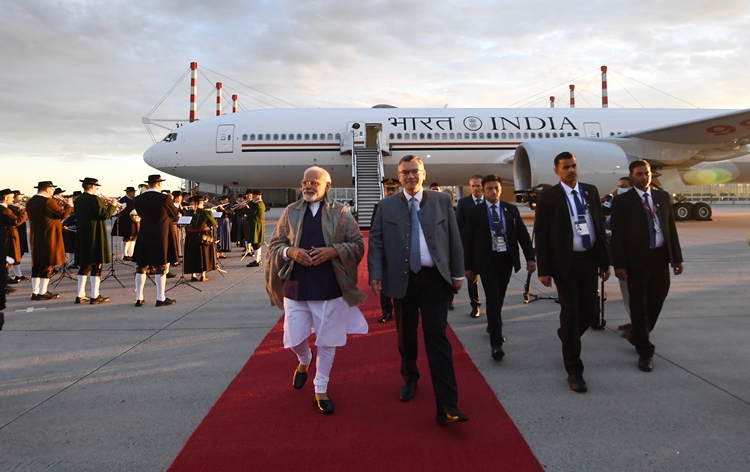 Prime Minister Narendra Modi today arrived in Germany to attend the G7 Summit. Mr. Modi got a warm welcome from the Indian diaspora in Munich, Germany. He interacted with children among the members of the Indian diaspora who had gathered to welcome him.

During the visit, besides participating in discussions with G-7 partner countries and guest International Organisations on climate, energy, food security, health, gender equality and more, Mr. Modi will also hold several bilateral meetings on the sidelines.
In a tweet, the Prime Minister said, he looks forward to fruitful discussions with world leaders during the Summit.

In a statement ahead of the visit, Mr Modi had said, he is visiting Germany at the invitation of the Chancellor of Germany for the G-7 Summit under the German Presidency. He said it will be a pleasure to meet German Chancellor Olaf Scholz again after the productive India-Germany Inter-Governmental Consultations last month. Germany has also invited other democracies such as Argentina, Indonesia, Senegal and South Africa to the G-7 Summit. The EU will be represented by the President of the European Council, Charles Michel, and the President of the European Commission, Ursula von der Leyen.

Prime Minister said that he is also looking forward to meeting members of the Indian Diaspora from across Europe while in Germany, who are contributing immensely to their local economies as also enriching India's relations with European countries.

The G7 is bringing together fellow democracies for deliberations on important global issues impacting humanity. This year's G7 summit is an opportunity to send out a powerful signal of unity in these turbulent times, advocating for progress, prosperity, peace and security. The seven working sessions of the summit will focus on various topics - global economy, partnerships for developing countries, foreign and security policy, sustainability, food security, multilateralism and digital transformation.