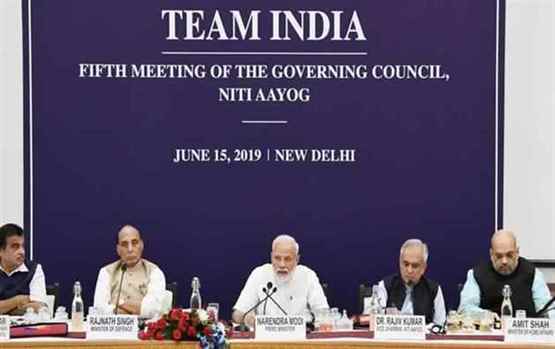 Recalling the recent General Elections as the world's largest democratic exercise, the Prime Minister said that it is now time for everyone to work for the country's development. He spoke of a collective fight against poverty, unemployment, drought, flood, pollution, corruption and violence.

The Prime Minister said that everyone at this platform has a common goal of achieving a New India by 2022. He described Swachh Bharat Abhiyan and PM Awaas Yojana as illustrations of what the Centre and the States can accomplish together.

He said that empowerment and ease of living, have to be provided to each and every Indian. He said, the goals that have been set for the 150th anniversary of Mahatma Gandhi, should be accomplished by 2nd October and work should begin in earnest towards the goals for 2022, the 75th anniversary of independence.

The Prime Minister added that the goal to make India a 5 trillion dollar economy by 2024 is challenging, but can surely be achieved. He said states should recognize their core competence, and work towards raising GDP targets right from the district level.

There is immense untapped export potential in several states, including the North Eastern states. He said, a thrust on export promotion at the state level will provide a boost to both income and employment.

Describing water as an important element for life, the Prime Minister said that the poor bear the brunt of insufficient water conservation efforts. He said that the newly created Jal Shakti Ministry will help provide an integrated approach to water.

He urged the states to also integrate their efforts towards water conservation and management. The Prime Minister also called for effective steps to tackle drought. He said that the spirit of 'per-drop, more-crop' needs to be promoted.

Reiterating the Government's commitment to double incomes of farmers by 2022, he said, this requires to focus on fisheries, animal husbandry, horticulture, fruits and vegetables.

He said that the benefits of PM-KISAN - Kisan Samman Nidhi - and another farmer-centric scheme should reach the intended beneficiaries well within time.

On the health sector, the Prime Minister mentioned the target of eliminating Tuberculosis by 2025. He urged those states, who have not implemented PMJAY under Ayushman Bharat so far, to come onboard this scheme at the earliest. (AIR NEWS)