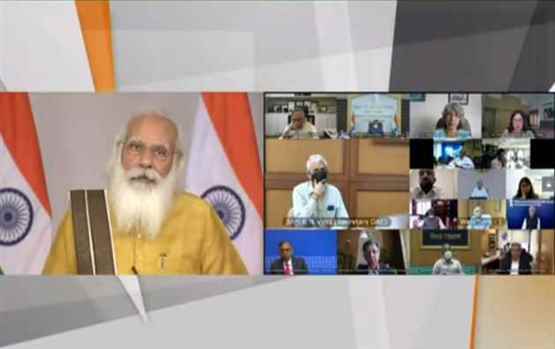 While chairing the virtual meeting of the Council of Scientific and Industrial Research, CSIR Society today, Mr. Modi said, India is committed to become self-reliant in Agriculture to Astronomy, Disaster Management to Defence Technology and Vaccines to Virtual Reality. He said, COVID-19 pandemic has posed the biggest challenge of this century, but science has paved a way for a better future. He said, creating solutions in crisis situations and creating possibilities is a fundamental vision of science. He said, the scientists have made the country self-reliant in production of COVID testing kits, medicines and oxygen. He said, the country is successfully dealing with the challenges of COVID-19 pandemic with the help of efforts made by the scientists.

Appreciating the role of Indian scientists for developing the indigenous COVID vaccine within a year, the Prime Minister has said, the scale and speed with which this work has been done is unprecedented. He said, developing a vaccine in such a short time is perhaps the first event in history. He said, Indian scientists are walking shoulder to shoulder with other countries and working at the same speed. Mr Modi asserted that India is showing the way to the world in the field of sustainable development, clean energy. He said, India is playing the role of a major engine in the development of the world by accelerating the development of other countries in the fields of software to satellites. The Prime Minister said that India’s goals should be in line with the needs of this decade as well as for the next decade.

Praising the efforts of the Council for Scientific and Industrial Research in the development of various technologies, Mr. Modi said, science and technology achieves heights in any country wherein it develops better synergy with industry and market. He said, CSIR is working as an institutional arrangement to maintain a synergized ecosystem of Science, Society and Industry. He said, CSIR has a powerful ecosystem of research and patents. He said, the goals and dreams of the country are based on the foundation of the 21st century, hence, the goals of CSIR are also extraordinary. Mr Modi said, CSIR has to take along with the industry as well as the society. He suggested that CSIR should make the information about its work accessible to the people, which would encourage scientific aspirations among the people.

Recalling the role of eminent scientist Shanti Swaroop Bhatnagar, he said, the future has a lot of expectations from scientists. He said, it is necessary to prepare for the future’s challenges so that solutions can be found for the upcoming disasters. Referring to the threat of climate change, he said, scientists have to be prepared for similar challenges.

The CSIR Society is part of the Department of Scientific and Industrial Research under the Ministry of Science and Technology. Its activities are carried out through 37 laboratories and 39 outreach centres spread across India. (AIR)