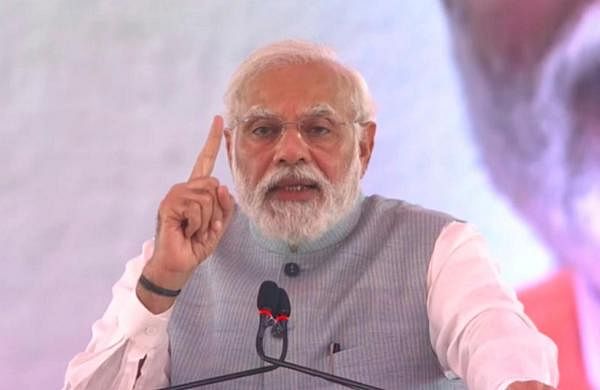 NEW DELHI: As India celebrates its 75th Independence Day, Prime Minister Narendra Modi on Monday addressed the nation from the historic Red Fort, which is under a hawk-eyed vigil.

The prime minister unfurled the national flag and addressed the nation from the historic Red Fort for the ninth consecutive time. Ahead of the flag hoist, he paid tributes to Mahatma Gandhi at Rajghat.

The Mughal-era fort has a multi-layered security cover with more than 10,000 security personnel deployed at the venue.

Around 7,000 invitees will arrive at the Red Fort and a five-kilometre area around the Red Fort has been marked as a "no kite flying zone'' till the tricolour is hoisted.

Security cover has been beefed up across the national capital and forces are on high alert to thwart any untoward incident as police have intensified patrolling and deployed extra pickets at vital installations based on intelligence inputs received via central agencies.

From facial recognition system (FRS) cameras installed at the entry point of the Red Fort to multi-layered security cover and deployment of over 400 kite catchers and fliers on rooftops and other sensitive locations in the fort area to counter any threats from sub-conventional aerial platforms, the area has been completely secured, a senior police official said.

Borders have also been sealed to ensure no untoward incident takes place in the national capital and strict action will be taken against anyone who tries to disrupt the law and order situation, the police official said.

The multi-layered security ring, including NSG snipers, elite SWAT commandos, kite catchers, canine units and sharpshooters on high-rise buildings, has been placed around the Mughal-era fort, and adherence to social distancing norms will be must like last year due to the Covid pandemic.

Dependra Pathak, Special Commissioner of Police (Law and Order) had said provisions of Section 144 have already been instituted in Delhi.

Anyone seen flying kites, balloons or Chinese lanterns from August 13 to August 15 till the end of the programme at Red Fort will be punished. Anti-drone systems from Defence Research and Development Organisation and other security agencies have also been installed, police said.

"Kite catchers have been deployed with necessary equipment on strategic locations and they will prevent any kind of kite, balloon and Chinese lanterns from reaching the function area. Radars will be deployed at Red Fort to counter any threats from sub-conventional aerial platforms and manned or unmanned flying objects," Pathak had said.

During the Prime Minister's Independence Day address in 2017, a kite had landed just below the podium. The Prime Minister had, however, continued with his address unfazed. The police had on July 22 issued an order prohibiting the flying of aerial objects such as paragliders, hang gliders and hot air balloons, and this will remain in force till August 16, they said.

Around 1,000 high-specification cameras have been installed in the North, Central and New Delhi district units to contain aerial objects. These cameras will also help monitor the VVIP route to the monument, police said.

On Friday, the Delhi Police had recovered over 2,200 live cartridges near Anand Vihar Inter State Bus Terminal and arrested six people in this connection. Police are also carrying out massive checks for Improvised Explosive Devices. The personnel have been briefed about adequate security, training and deployment as per plans.

According to the advisory, traffic for general public around Red Fort will remain closed from 4 am to 10 am on Monday. It will be open to only authorised vehicles, it said.

Parking facilities will not be available at the Delhi Metro stations from 6 am on Sunday till 2 pm on Monday in view of the security measures adopted on the occasion of Independence Day. However, the Metro train services will continue to run as per normal schedule.

The August 15 ceremony is particularly significant this year as it marks the 75th anniversary of India's independence, with the government launching a host of exercises to add to the verve around the celebration.

(With inputs from agencies)