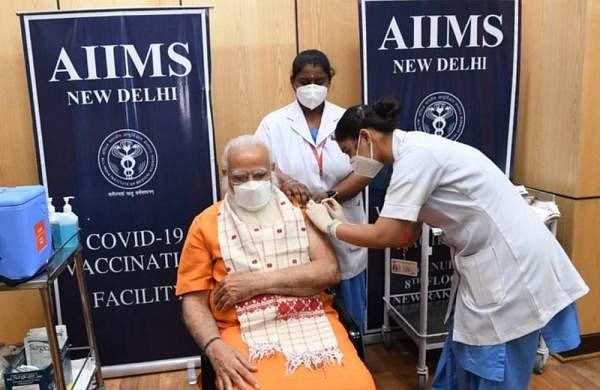 NEW DELHI: Prime Minister Narendra Modi on Thursday took his second dose of the COVID-19 vaccine at the AIIMS here, and asked those eligible for the shot to take it soon to defeat the virus.

He had taken his first jab on March 1 at the hospital.

"Got my second dose of the COVID-19 vaccine at AIIMS today. Vaccination is among the few ways we have, to defeat the virus. If you are eligible for the vaccine, get your shot soon. Register on "http://CoWin. gov.in"CoWin.gov.in," he tweeted.

The prime minister also posted a picture of him receiving the jab.

Official sources said the two nurses who administered the vaccine to the prime minister on Thursday are P Niveda from Puducherry and Nisha Sharma from Punjab.

Niveda was also involved in administering him the first shot on March 1.

Sharma, a nursing officer at the hospital, said they were told in the morning that Modi is visiting the hospital for receiving the vaccine's second dose, and described the meeting with the prime minister as a "memorable moment".