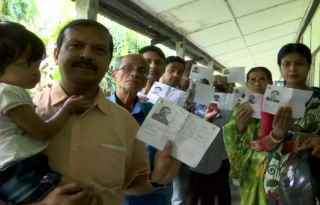 Voting is underway in 116 Parliamentary constituencies in the third phase of Lok Sabha elections. The constituencies are spread over 13 States and two Union Territories.

In Gujarat and Kerala, 39 per cent people have cast their vote. 36 per cent voting recorded in Karnataka, around 30 per cent each in Uttar Pradesh, Bihar and Maharastra; 43 per cent in Chhattisgarh, 52 per cent in West Bengal, and 45 per cent in Goa.

In Karnataka, 5,600 are critical booths where central forces are deployed and the election is monitored with the help of web cameras and videographers. In West Bengal, voting has been peaceful so far barring some stray incidents.

In Bihar, polling is underway peacefully in five constituencies Jhanjharpur, Supaul, Araria, Madhepura and Khagaria amidst tight security arrangements. In Chhattisgarh, heavy voter turnout is being witnessed in almost all areas. Meanwhile, the filing of nominations for the sixth phase elections will end today.

The scrutiny of nominations will take place tomorrow, while the last day for withdrawal of candidature is Friday. 59 constituencies, spread over seven states, will go to polls in this phase on the 12th of next month. (AIR NEWS)