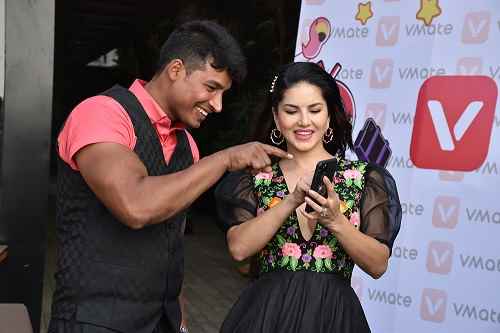 New Delhi, 17th January: VMate's fitness video creator Abdullah Pathan from UP’s Moradabad who won the New Year Dhamaka campaign met the Bollywood diva Sunny Leone at Mumbai. What followed next was a pure show of strength, chivalry and fun which impressed the diva a lot. Sunny’s decision to choose Abdullah as her Mr. V turned out to be the best decision as she was blown away by his strength and persona.

With the same enthusiasm which Abdullah showed in his videos to win the campaign, he grabbed this once-in-a-lifetime opportunity and gave it all to win over Sunny. Living up to his reputation the Bahubali of Moradabad, Abdullah went on to smashing a coconut with his bare hands. Also, tried to match the dance steps with Sunny on ‘Baby Doll’ song which was a treat to watch as dancing was not his cup of tea. He even lost a thumb wrestling match with Sunny which she taught him how to play. Even though he was visibly nervous at first, but Sunny Leone's humbleness and sporting attitude encouraged him to be himself which made the whole affair a memorable one for both of them.

VMate recently released the candid video of the date, ithas already added fuel to the fire with many speculations being made around it.

Not only this, Abdullah who is already popular on VMate as a fitness enthusiast opened up to Sunny regarding his dream to compete in WWE & how he has approached famous sports personalities for mentoring him to realize his WWE dream.

Reminiscing about the date Abdullah said, "The journey to meet Sunny was fun filled, my friends and family members came out in my support to create more and more video’s. Right from landing at the airport till I met Sunny I created many scenarios in my mind to impress her. However, Sunny’s positivity led to so many unexpected moments which I will relish for a very long time. She also wished me luck for my WWE journey and gifted me a pair of autographed boxing gloves which I will cherish for a life time. She has seen my previous stunts and assured me that she will watch my videos on VMate in future, which is a big motivation for me.” He also added that "I am an avid VMate user and the platform has given me a lot. It has helped me to showcase my talent in front of the world, and people love me for that."

Many images and videos of this special date have gone viral. Social media users are sharing heartfelt messages for Sunny's positive vibes and are also hailing Abdullah as 'the next WWE star from VMate'. For many, Abdullah has become a star already! Some were even envious of his achievement. Various influencers on YouTube and other platforms are talking about this unique date, and their comment sections are full with debates on how they can be next to win a date with their favourite stars.

Before venturing into the world of fitness, Abdullah was doing a course in civil engineering which he gave up to pursue his passion for fitness. Today, his passion drives him and resultantly, he is living a life on his own terms. To form a strong foundation in fitness, he has also pursued a course on diet and nutrition. He leverages his knowledge to share valuable tips on health and fitness on his VMate channel. Demonstration of his unbelievable strength and useful fitness tips has helped him to make fans of all shape size and gender across the country.