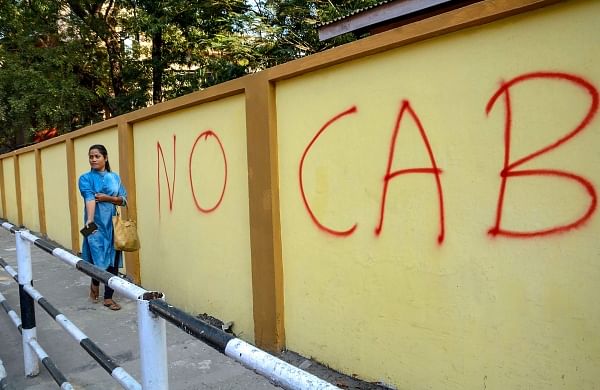 NEW DELHI: Protests were held in the Parliament complex and elsewhere in the city and the country against the Citizenship Amendment Bill which was introduced in the Lok Sabha by Home Minister Amit Shah.

While Indian Union Muslim League MPs protested in front of the Mahatma Gandhi statue in Parliament premises, the All India United Democratic Front (AIUDF) demonstrated at Jantar Mantar and held up placards saying that the bill was against the idea of India.

"We reject this bill. It is against the Constitution and against Hindu-Muslim unity," Badruddin Ajmal, AIUDF MP from Dhubri, Assam, told reporters when asked about the CAB.

The Citizenship (Amendment) Bill, 2019, which seeks to give Indian nationality to non-Muslim refugees from Pakistan, Bangladesh and Afghanistan facing religious persecution there, was introduced in the Lower House of Parliament by Shah on Monday.

According to the proposed legislation, members of Hindu, Sikh, Buddhist, Jain, Parsi and Christian communities, who have come from Pakistan, Bangladesh and Afghanistan, till December 31, 2014, and facing religious persecution there will not be treated as illegal immigrants but given Indian citizenship.

Protests were also held in different parts of the country over the introduction of the bill. In Assam, the bill is facing huge protests as the people say that it will nullify the provisions of the Assam Accord of 1985, which fixed March 24, 1971, as the cut-off date for deportation of all illegal immigrants irrespective of religion.

Protests were held in all major cities of Assam, with shops being closed in Guwahati following a shutdown called by various organisations opposing the bill. In Agartala and West Bengal also protests broke out against the bill.