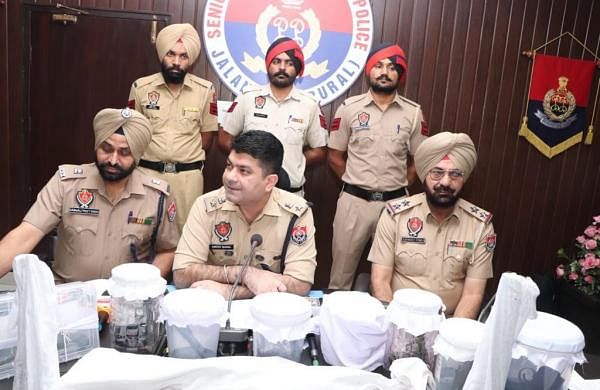 CHANDIGARH: After a three-week-long operation, the Punjab police has busted an extortion and arms smuggling racket. A total of 13 gang members including trained shooters have been arrested by the police. The members were affiliated to Palwinder Singh alias Pinda gang a close aide of gangster Vicky Gounder. Moreover, six other persons were arrested on charges of harboring and providing logistic support.

Senior Superintendent of Police of Jalandhar (Rural) Swapan Sharma said that a close aide of gangster Vicky Gounder, Palwinder Singh alias Pinda, whose role was also emerged in the Nabha Jail break, is said to be the Kingpin of the gang and was apparently handling the gang with the help of Paramjit alias Pamma, a native of Shahkot, Jalandhar and currently residing in Greece.

All those arrested persons are history-sheeters and have been facing criminal cases of heinous crimes including murder, attempt to murder, extortion, and arms smuggling.

The police have also recovered nine weapons including Seven .32 bore pistols, Three .315 bore Pistols, one .315 bore gun, and one .12 bore gun, and two vehicles including Toyota Innova and Mahindra XUV 500, besides, foreign currency amounting to Rs 8 lakhs from their possession.

Sharma said that Paramjit alias Pamma used to finance the gang and used to send foreign currency via Hawala to Amarjit alias Amar, who further used to distribute among the gang members to carry out various criminal activities.

He said that the gang is active for the last six years and has been involved in organized extortion, armed highway robbery, land mafia and weapon smuggling from Madhya Pradesh.

"With the arrest of this group, the police have also been able to crack three blind cases which include murder, extortion, and highway armed robbery occurred in Jalandhar and Bathinda,” said Sharma, while adding that of total 19 arrested persons, at least 12 were wanted by the police in eight criminal cases.