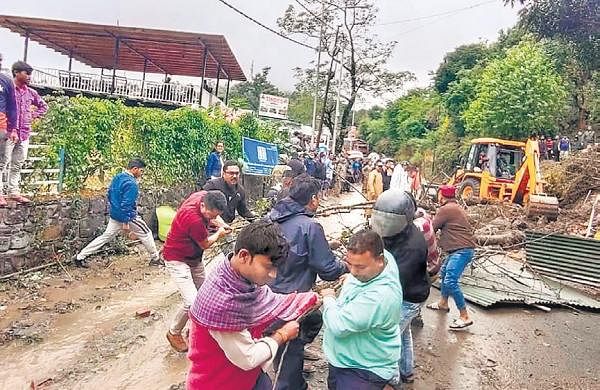 DEHRADUN:  Puran Singh Sijwali (39), a farmer from Bakrigod village near Joelikote in Nainital, has lost his house, farm and livestock. In many places in Uttarakhand, it will take a lifetime to rebuild life from the scratch.

“A lot of land has been washed away along with our crops ready for harvest. This included paddy, vegetables and livestock. Our house is damaged beyond repair. It took 28 years to build all of this,” said Sijwali, who has been moved to a safer location in Haldwani of Nainital district.

The state government is yet to assess the damages suffered by farmers. With the ongoing harvest season of paddy, a majority of the farmers had either started harvesting or were planning to do so in a day or two before the rains arrived with unprecedented fury.

Vijay Singh, another farmer from Chhoti Haldwani village also known as Corbett village, said, “I was planning to start on October 18, but little did I know it will all be gone. We had planned our Diwali and year ahead based on the produce we planned to sell. Now our Diwali will be as dark as one can only imagine.”

Business owners, shopkeepers and people have suffered damages to their properties and possessions. Their lives have been thrown in disarray. Sandeep K Pandey, who runs a chain of shops that supplies homemade flavoured salts, said, “Tonnes of salt got dissolved as the shops in the hills are flooded.

Hundreds of people have been sheltered at Kakrighat including some children. Roads have been washed away measuring in kilometres. It will take months to recuperate and rebuild. This is worse than 2013 for Nainital and Udham Singh Nagar districts.”

Plight of the senior citizens, pregnant women, sick and those with other medical conditions have got worse as hundreds of villages remain cut off due to incidents of landslides which have blocked connecting roads in Kumaon hills.