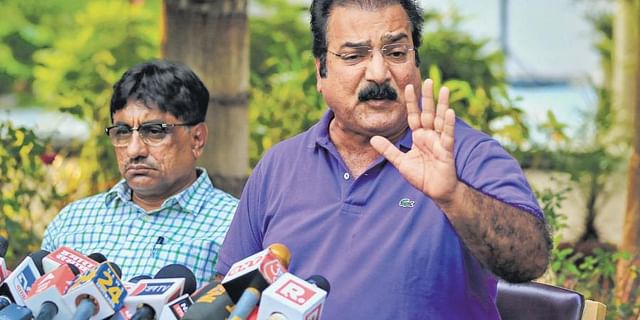 JAIPUR: With the Congress high command planning disciplinary action, some of Ashok Gehlot's loyalists have started softening their tone. The boycott of the Congress Legislature Party (CLP) meeting in Jaipur on Sunday evening and the subsequent developments have been seen as “indiscipline” by the party's high command.

At a press conference in Jaipur on Tuesday, Chief Whip and PWD Minister Mahesh Joshi, who is facing disciplinary action after Sunday’s revolt, said that he would accept any decision of the party's high command. Joshi claimed that AICC Rajasthan in-charge Ajay Maken had not fully understood what the Rajasthan MLAs had to say.

Joshi, one of the key ministers who reportedly spearheaded the rebellion, said, “If the high command gives notice, then I am ready to respond. If someone punishes me, he will also suffer. No MLA was forcibly invited to UDH Minister Shanti Dhariwal’s house. Everyone bows before the wishes of the high command.”

He added, “We never said that our three conditions should be part of the proposal. Ajay Maken is confused. We did not even know the agenda of the meeting. If given a chance, we will prove our loyalty.”

At a press conference on Monday, Dhariwal had stepped up the offensive against Maken, accusing him of conspiring against Gehlot. Meanwhile, Mallikarjun Kharge and Maken, who had come to Jaipur as AICC
observers, reportedly emailed their report to Sonia Gandhi, in which they questioned the role of Ashok Gehlot and three ministers of his camp as well as some MLAs. Action has been recommended against Shanti Dhariwal, Joshi and Food Minister Pratap Singh Khachariyawas, according to sources.

The CLP meeting was to be held at 7 pm on Sunday evening at the CM’s residence, but the MLAs didn’t turn up, the report said. Instead, MLAs close to Gehlot went to a meeting at the house of Dhariwal, the report added. On Sunday, about 90 supporters of Gehlot did not attend the CLP meeting, and instead attended a meeting at Dhariwal’s house. Later, 70 MLAs went to the house of Speaker CP Joshi and submitted their resignations. Meanwhile, Sachin Pilot left for Delhi on Tuesday afternoon, while Gehlot met some of his cabinets at his residence.

As the political impasse in Rajasthan continues, the BJP said that it will move cautiously and adopt a wait-and-watch policy. The Congress government is facing uncertainty after several MLAs close to Rajasthan Chief Minister Ashok Gehlot resigned last week over the purported move to appoint Sachin Pilot as the CM.

Amidst rumours that the state is heading for President’s rule, Rajasthan BJP president Satish Poonia told TNIE that the party has no plans to approach the Raj Bhavan. Poonia, who is in Delhi currently has spoken with BJP president J P Nadda and apprised him of the situation. As many as 82 MLAs, including ministers, have rendered resignations to Assembly Speaker C P Joshi on Sunday.

“Right now, we have no intention to approach the Governor. First, we have to watch how the situation is evolving over the next two days.  People are suffering because of Constitutional machinery failure,” said Poonia. The central leadership has asked the state unit to keep a close watch on the evolving situation, said Poonia, adding that the party is calibrating its strategies for the Assembly elections scheduled for next year. In the 200- member Assembly, while Congress has 108 MLAs, BJP has 71. Thirteen Independent MLAs also support the Congress government.  (AIR NEWS)