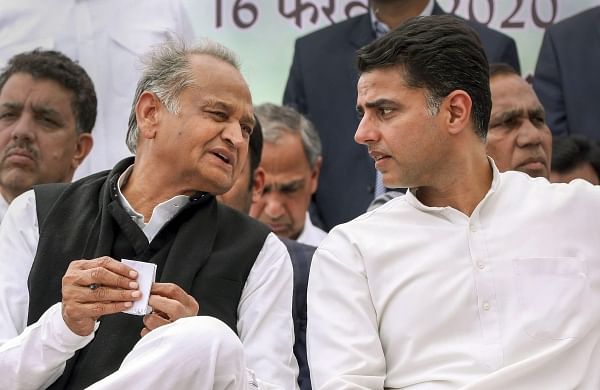 Ahead of the meeting, Congress general secretary Avinash Pande issued another appeal to Pilot, who had skipped the first CLP meeting at Chief Minister Ashok Gehlot's home on Monday.

Eighteen other Congress MLAs also did not attend Monday's meeting, according to sources. But independents and MLAs from other parties participated, expressing support for Gehlot.

Tuesday's meeting was said to be a second chance for Pilot, who is also the president of the state unit of the party. But MLAs considered close to Pilot were again not seen there. Some of them have indicated that they would prefer a show of strength in the 200-member state assembly.

The Congress meeting is being held at a resort where Gehlot and other MLAs are camping since Monday.

"I appeal to Sachin Pilot and all his fellow MLAs to join today's Legislature Party meeting," Avinash Pande, who is the Rajasthan in-charge at the AICC, tweeted Tuesday morning.

"While expressing your faith in the ideology and values of the Congress, please make your presence felt and strengthen the hands of Sonia Gandhi and Rahul Gandhi," he said.

He told reporters that a second chance is being given to Pilot and hoped that all MLAs come and extend solidarity with the leadership for which people voted to ensure the state's development.

Congress leader Randeep Surjewala on Monday night announced the summoning of second CLP meeting, amid attempts by the party's top leadership to woo back dissidents led by Pilot.

Former party president Rahul Gandhi and Priyanka Gandhi are among the senior leaders who had been in touch with Pilot, sources said. Party leaders had said 106 of 122 MLAs from Congress and the allies -- attended Monday's meeting, a claim contested by the Pilot camp.

Pilot and his supporters claimed to have the backing of 30 Congress MLAs and some independents. The pilot has been upset since he was denied the Rajasthan chief minister's post after the December 2018 assembly elections.