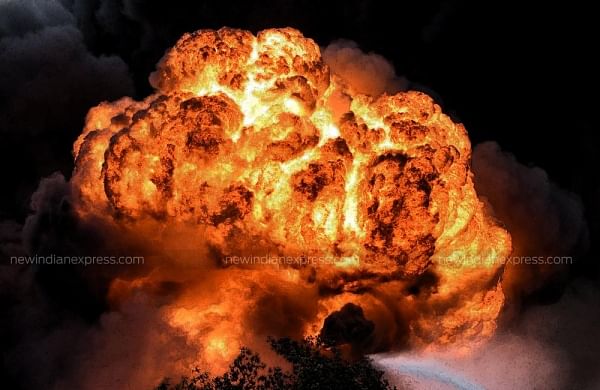 AHMEDABAD: Five persons were booked on Sunday on the charge of causing death by negligence, two days after a fire at a designated private COVID-19 hospital in Gujarat's Rajkot killed five patients, police said, adding that probe revealed violation of multiple norms by management of the hospital.

The accused included chairman, executive director, and other officials of Gokul Healthcare Pvt Limited which operates Uday Shivanand COVID Hospital, where the five deaths had occurred.

"The five persons, including top officials of Gokul Healthcare, have been booked under section 304-A (Causing death by negligence) of the Indian Penal Code after probe revealed gross negligence on their part. Norms were flouted to run the hospital. There was also absence of fire safety facilities," Rajkot DCP Manoharsinh Jadeja told reporters.

"The five accused are being questioned. We will conduct COVID-19 tests before arresting them," he said.

Jadeja said the new COVID-19 hospital began functioning after getting permission on September 15.

"The hospital was started in three floors rented at a hospital being run by Shivanand Mission Trust. Several norms were found to be flouted and negligence of hospital administrators came to fore during investigation," he said.

The DCP said the ICU emergency gate was found blocked, as a result of which it could not be used for rescue when the blaze erupted.

The Uday Shivanand COVID Hospital is a 57-bed hospital with only a four-foot door and a staircase which hampered the rescue operation, he said.

The ICU entry door is not constructed as per the standard norms and there is no fire or emergency exit signages, the police officer said.

He said mandatory sprinkler system was not fitted inside the hospital and the staff was not trained to handle fire-fighting equipment.

Preliminary probe had revealed the blaze occurred due to a short circuit in a ventilator in the ICU ward of the hospital.