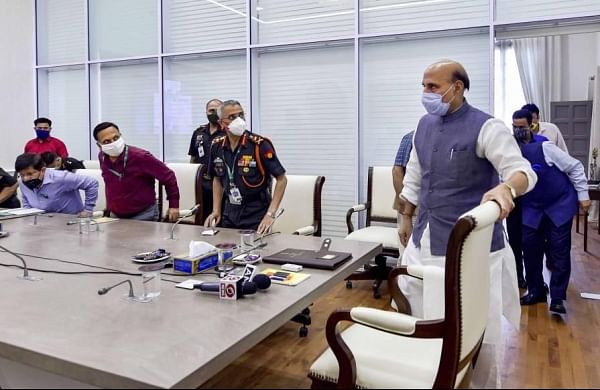 NEW DELHI: Defence Minister Rajnath Singh on Thursday inaugurated six bridges in border areas of Jammu and Kashmir, and asserted that development of remote areas in the region will continue to be a key priority for the NDA government.

Four bridges were constructed on the Akhnoor-Pallanwala road in Akhnoor, while two bridges were built on the Tarnah Nallah in Kathua district, the Defence Ministry said in a statement.

The total cost of construction of the bridges was Rs 43 crore.

The inauguration of the bridges, built by the Border Roads Organisation (BRO) comes at a time when India and China are engaged in a border row in eastern Ladakh.

Officials said the dedication of the bridges to the people of Jammu and Kashmir carries a bigger message that India will continue to develop key infrastructure in border areas notwithstanding hostilities by any adversary.

Our government is committed to promoting infrastructure on our borders and necessary resources will be provided for this.

Our government has a keen interest in the development of Jammu and Kashmir," Singh said in his brief address.

"Keeping in mind the needs of the people of Jammu and Kashmir and Armed Forces, many other development works are also in the pipeline, which will be announced in due time.

About 1,000 kilometre long roads are currently under construction in Jammu region, he said.

The defence minister said the government has ensured that sufficient resources are provided to the BRO for the construction of strategic roads.

Despite the COVID-19 epidemic, the government will not let the resources of the BRO fall short, he added.

The budget for the BRO for 2020-2021 is likely to be Rs 11,800 crore, the ministry said, adding the higher allocation will expedite the construction of strategic roads, bridges and tunnels along our northern borders.

In his remarks, Singh congratulated the BRO for construction of the bridges in "record time".

He said that roads and bridges are the lifeline of any nation and play a vital role in the socio-economic development of far-flung regions.

Prime Minister Narendra Modi is regularly monitoring the progress of these projects and adequate funds are being provided for their timely execution, he added.