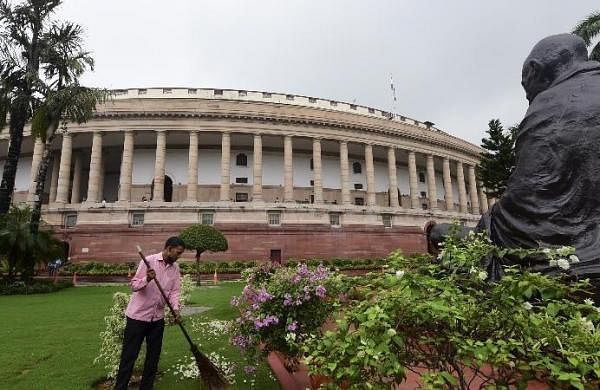 NEW DELHI: The Rajya Sabha proceedings were adjourned till 2.30 pm on Friday, as Opposition members created an uproar over the Pegasus snooping row and other issues.

When the House re-assembled at 12 noon after the first adjournment for the Question Hour, several Opposition members trooped into the Well, some of them carrying placards, and started raising slogans against the government.

In the meantime, the House took up a few of the listed questions and the ministers concerned replied to the members' queries.

However, as the sloganeering by the Opposition members continued, Deputy Chairman Harivansh Narayan Singh adjourned the proceedings till 2.30 pm.

Earlier, Chairman M Venkaiah Naidu had adjourned the proceedings till 12.00 hours just as the members of the Congress, TMC and other opposition parties stood up to raise the issues they have been pressing for since the start of the Monsoon Session of Parliament on July 19.

Before adjourning the House, Naidu expressed concern over parliamentary dignity and prestige being compromised by MPs by conducts such as whistling and placing placards in front of the ministers speaking during their protests in the last few days.

He appealed to the members to see that the decency and dignity of the House are maintained.

Thereafter, the listed official papers were laid on the table of the House.

Naidu then called for the Zero Hour, where MPs raise issues of public importance.

But just like the previous days, the Opposition MPs were up on their feet raising the snooping controversy, farm laws, fuel prices and other issues.