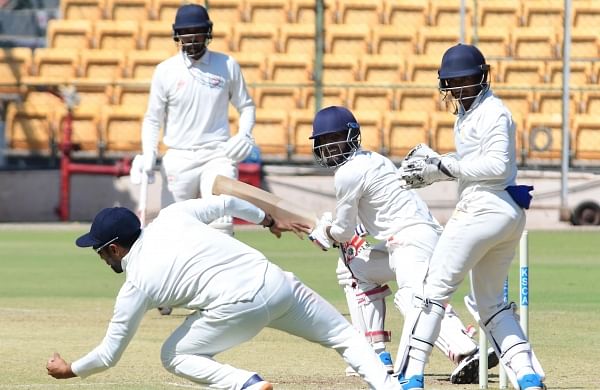 BENGALURU: If the M Chinnaswamy surface helped bowlers throughout the opening day of the Karnataka-Baroda Elite Group B Ranji Trophy clash, the assistance subsided considerably on Day 2 as batting became comparatively easy.

For the record, a total of 17 wickets fell on the first day. When wickets are hard to come by, bowlers need support from everyone involved, especially fielders, who can lift the mood in the team with a brilliant catch or a run-out.

But on Thursday, Karnataka floored four chances, including two dropped catches from skipper Karun Nair. Stationed at first slip, Nair gave reprieves to Ahmadnoor Pathan and Abhimanyusingh Rajput when the batsmen were on 55 and nine runs respectively.

The former, who was dropped again by wicketkeeper Srinivas Sharath for 86, finally fell for 90. Even Deepak Hooda (50) got a reprieve at 27 when substitute Dega Nischal failed to latch onto a difficult chance at short leg.

At the end of the day, Karnataka still managed to scalp five wickets as Baroda posted 208 to write off the deficit and take a slender lead of 60 runs after being bowled out for a paltry 85 in their first innings.

The story could have been a lot different had the fielders held onto their chances. Despite the largesse offered by fielders, Karnataka bowlers kept asking questions to the batsmen on a consistent basis and it fetched them rewards.

Prasidh Krishna broke the opening partnership when he had Kedar Devdhar for 15 runs. Ten balls later, Krishnappa Gowtham trapped Vishnu Solanki for two to make it two in as many overs. But a third-wicket partnership of 94 between Pathan and Hooda frustrated Karnataka. They looked in good touch, especially the latter, who pushed the home team on the backfoot with his attacking display.

At the stroke of tea, Baroda looked in a healthy position as they were 121 for two. But, things changed in the final session as More castled Hooda with a peach of a delivery to end the resistance. Krunal Pandya's stay in the crease was short-lived by Devdutt Padikkal's diving catch at gully as Baroda was reduced to 159/4. It became 188/5 when Prasidh dismissed Pathan in the final hour of play.

Baroda though still has five wickets in hand but two of them might not turn up to bat. Their no. 11 Babasabikh Khan Pathan, who suffered a hamstring injury on the first day, is all but ruled out while wicketkeeper Viraj Bhosale is still nursing a fever casting doubt over his participation.

Despite fortunes favoring them, Karnataka will hope to wrap up Baroda innings as soon as possible to ensure they don't chase a tricky target in the fourth innings.

Before Karnataka pacers had the ball in their hand, Abhimanyu Mithun (40), who started his day on nine, played an attacking knock that included five fours to help the team consolidate the lead.