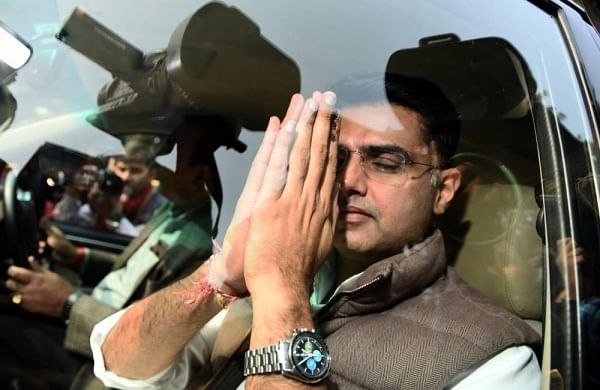 Congress leader Randeep Surjewala on Tuesday announced that Sachin Pilot has been removed as the Deputy Chief Minister of Rajasthan, amid the ongoing political crisis. Pilot has also been removed from his party post as Rajasthan PCC chief.

I regret that Sachin Pilot and some of his associates have been swayed by BJP's plot and are now conspiring to topple the Congress government elected by 8 crore Rajasthanis. It is unacceptable, said the Congress national spokesperson after a party meeting in Jaipur.

After the announcement, Rajasthan CM Ashok Gehlot met with Governor Kalraj Mishra at Raj Bhavan and submitted a letter of support of MLAs.

The current Education Minister in Gehlot government, Govind Singh Dotasra, has been appointed as the new PCC chief in Rajasthan.

Along with the rebel leader, ministers in his camp also were dropped. These include state Tourism Minister Vishvendra Singh and Food and Civil Supplies Minister Ramesh Meena.

The move comes after the scion of Rajasthan refused to participate in Congress Legislature Party meeting twice after the tussle between Polot and Gehlot reached new heights.

Ahead of the meeting, Congress general secretary Avinash Pande made another bid to reach out to the rebel leader, who had skipped the first CLP meeting at Chief Minister Ashok Gehlot's home on Monday.

The ruling Congress is facing a crisis after a rebellion by Sachin Pilot and dissident MLAs. Pilot has been upset since he was denied the Rajasthan chief minister's post after the December 2018 assembly elections.

Pilot and his supporters claimed to have the backing of 30 Congress MLAs and some independents. The Ashok Gehlot camp has claimed that 109 MLAs, both of the Congress and others, are in support of the government.