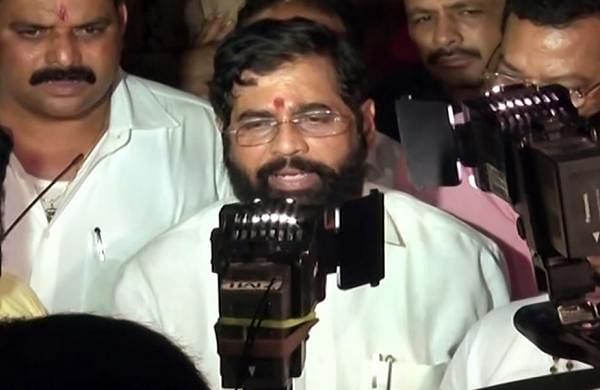 MUMBAI:  A day after the Shiv Sena sacked rebel leader Eknath Shinde as the head of the party in the Maharashtra Assembly, his loyalists appointed him as the party’s legislative party leader and named a new party whip.

After shifting the 34 rebel MLAs to Guwahati from Surat overnight, Shinde sought to consolidate his position, as the party brass in Mumbai called a legislative party meeting and threatened to invoke the anti-defection law. Shinde’s group appointed Bharat Gogawale as the new party whip replacing Sunil Prabhu.
Shinde claimed he had support of 40 Sena MLAs and that numbers will go up by and by. If Shinde can prove he has 37 of them with him, then they will escape the defection law.

A resolution adopted by the rebels sought to paint the Uddhav government as corrupt, pointing to the serious allegations against jailed Aghadi leaders Anil Deshmukh and Nawab Malik. “The Congress and the NCP are using their office and power to undermine the base and foundation our Shiv Sena cadre,” the resolution alleged.

“The Sena is a party with strong ideology and was formed for fighting for the rights the Marathi manoos. Since the last two-and-a-half years, our party and its leadership compromised on its principles. Severing the alliance with the BJP has had a tremendous negative impact on the voters and party cadre at large,” the resolution read.

It added that the party’s leaders were facing tremendous pressure from their electorate. “We have been subjected to lot of criticism for being part of this corrupt government.”

Four more in Guwahati
Another chartered plane with four Sena MLAs arrived in Guwahati on Wednesday to join the rebel Shiv Sena legislators who reached the city earlier, sources said