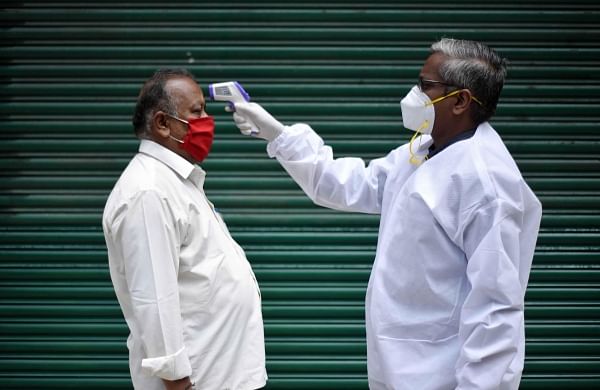 NEW DELHI: With a record single-day surge of 24,850 coronavirus infections and 613 fatalities, India's COVID-19 caseload zoomed to 6,73,165, while the death toll climbed to 19,268 on Sunday, according to the Union Health Ministry data.

Recording over 20,000 coronavirus infections for the third consecutive day, India is set to overtake Russia's tally.

According to the Johns Hopkins University, which has been compiling COVID-19 data from all over the world, India is behind Russia with 399 cases.

India is currently the fourth worst-hit nation by the pandemic after the US, Brazil and Russia and is at the eighth position in terms of the death toll.

Tamil Nadu registered 4,280 cases in the past 24 hours, while Delhi, Telangana, Karnataka, Assam and Bihar added a total of 7,935 COVID-19 cases in a day.

These seven states have contributed to around 78 per cent of the singe-day spike.

With a steady rise, the number of recoveries stands at 4,09,082 while one patient has migrated.

There are 2,44,814 active cases of coronavirus infections presently in the country, the data showed.

"Thus, around 60.77 per cent of patients have recovered so far," an official said.

The total number of confirmed cases include foreigners.

Of the 613 deaths reported in the last 24 hours, 295 are from Maharashtra, 81 from Delhi, 65 from Tamil Nadu, 42 from Karnataka, 24 from Uttar Pradesh, 21  from Gujarat, 19 from West Bengal, 12 from Andhra Pradesh, nine from Bihar, eight from Jammu and Kashmir, seven from Rajasthan, five each in Haryana, Madhya Pradesh, Odisha, Punjab and Telangana, two each from Goa and Jharkhand and one from Himachal Pradesh.

Jharkhand has registered 17 deaths, Chhattisgarh and Assam 14 each, Puducherry 12, Himachal Pradesh 11, Chandigarh and Goa six each and Meghalaya, Tripura, Ladakh and Arunachal Pradesh have reported one fatality each, according to the Health Ministry.

More than 70 per cent deaths took place due to comorbidities, it said.

Punjab has reported 6,109 novel coronavirus infections so far, while Kerala has 5,204 cases.

Puducherry has recorded 802 COVID-19 cases, Nagaland 563, Chandigarh 460 and Dadra and Nagar Haveli and Daman and Diu together have reported 271 COVID-19 cases.

Arunachal Pradesh reported 259 cases, Mizoram has 164 cases, Andaman and Nicobar Islands has 119, Sikkim has registered 103 infections so far, while Meghalaya has recorded 62 cases.

State-wise distribution is subject to further verification and reconciliation, it added.