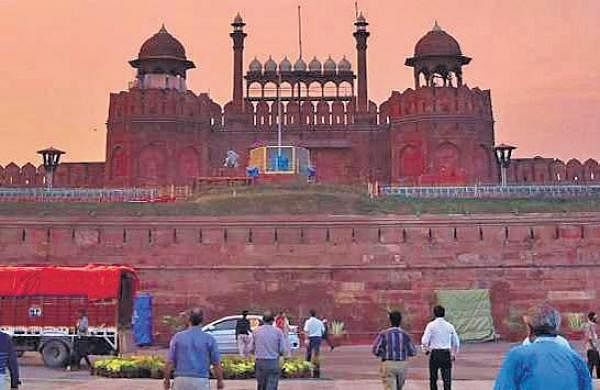 NEW DELHI: The Shahjahanabad Redevelopment Corporation (SRDC) has asked traffic police to allow vehicular movement on the Kashmere Gate-Daryaganj stretch of Netaji Subhash Marg, which was shut for over a month for development of scramble crossing at the Red Fort junction, officials said on Friday.

According to officials of SRDC and the PWD, the redevelopment of the Red Fort crossing has been completed and the junction is ready to be used.

The SRDC is the nodal agency looking after the redevelopment of the Chandni Chowk heritage market.

The construction of scramble crossing at the Red Fort junction is also part of the Chandni Chowk redevelopment project and has been done by the Public Works Department (PWD) of the city government.

The PWD started the redevelopment work of the Red Fort crossing in March this year, and it was to be completed in 40 days.

The project got delayed due to a shortage of workforce during the second wave of COVID-19.

The deadline was shifted to July from April.

"We have now completed the revamp work.

Only a few patterns (on the road) are to be drawn but that can be done even when the traffic is allowed on the stretch.

"We have given a go-ahead to the traffic department regarding opening of the Kashmere Gate to Daryaganj carriageway," a PWD official said.

A senior official of the SRDC confirmed the development and said that instructions have been issued to the traffic authorities regarding opening of the road.

"Yesterday (Thursday) we (SRDC) had a meeting with the traffic authorities and the PWD officials where the PWD said that the stretch is ready for traffic operations. We have now asked the traffic police to open the carriageway for vehicular movement," the official said.

He added that though the instructions have been issued by the SRDC and the PWD regarding opening of the road for vehicles, it will be executed by the traffic department.

"They (traffic authorities) are likely to open the road for vehicles by today (Friday) evening or tomorrow," the official said.

Currently, commuters going towards Daryaganj or Jama Masjid from Old Delhi Railway Station and Kashmere Gate have to take a detour and reach their destination via the Salimgarh bypass and other routes.

After the carriageway is opened for traffic, commuters will be able to reach Daryaganj or Jama Masjid from Old Delhi Railway Station directly via the Red Fort crossing.

The Red Fort junction will be Delhi's first scramble crossing that will allow pedestrians to cross in any direction, including diagonally, as signals will completely stop the traffic for some time in all directions.

The revamped crossing will be safer for pedestrians and cyclists.