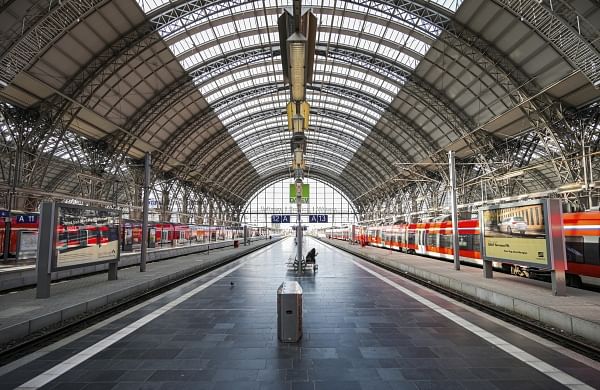 These are some of the measures suggested by the International Union of Railways (which calls itself UIC) in a report to guide the management of COVID-19 among railway stakeholders worldwide during the coronavirus pandemic.

The paper, titled "Management of Covid-19: Guidance for Railway Stakeholders'' will be updated through the pandemic as the situation evolved.

Sources here say the Indian Railways, which is working on its strategy to exit the lockdown, is looking at measures taken globally to fight the pandemic which has killed 199 people in the country and infected 6,412.

The Railway passenger services in India were halted on March 25 when a 21-day countrywide lockdown came into effect to hinder the spread of coronavirus.

The UIC, which has 194 members spread across the globe, has said that the idea behind the paper was to help railways to manage their COVId-19 response.

from the carriages; and in night trains change the blankets after every single use.

"Checking before travel starts that all staff onboard are healthy (via e.g. temperature screening); - Using disposable rubber or nitrile gloves to unpack deliveries; - Wearing single-use gloves for ticket controlling, or stop controlling tickets to avoid touching,'' the report says.

The Korea Railroad in its best practices has listed disinfecting highly-affected areas and trains more than twice a day, allocating window seats first as an effort to distancing between passengers, and doubling unreserved seats as some of the measures to control the pandemic.

The Spanish Railroad is selling only one-third of seats in trains which are still running.

Sources said that railway officials in India too are mulling if only a certain percentage of seats can be sold.

The UIC paper also recommends forming a task force to monitor the evolution of the situation in the respective countries and liaison with local authorities and identify preventive measures and procedures to be taken.

It also suggests ways to detect ill travellers through temperature screenings and recommends the WHO prescribed social distancing norm of 5 feet from others.

Amor other precautions, it said, "Special cleaning of areas where passengers, public and staff are frequently present (stations, mess rooms).

"Ensuring that cleaning personnel are on board during travel (not only between travels). Providing access to disinfectant spray to be used by the staff without restriction in those places."

The international railway body has also recommended that personal-protective equipment (PPE) be made available at defined places on trains and at stations for use if an infection is suspected.

This should be based on the recommendations of national authorities, it said.

UIC members like China have health checkpoints at train and metro stations where temperature checks are taking place, it has also run migrant-worker trains, providing "point-to-point" transport services post the lockdown to ensure resumption of work, the report states.

It also recommends putting up display banners, brochures, training videos clips at railway stations and trains about precautions that need to be taken.